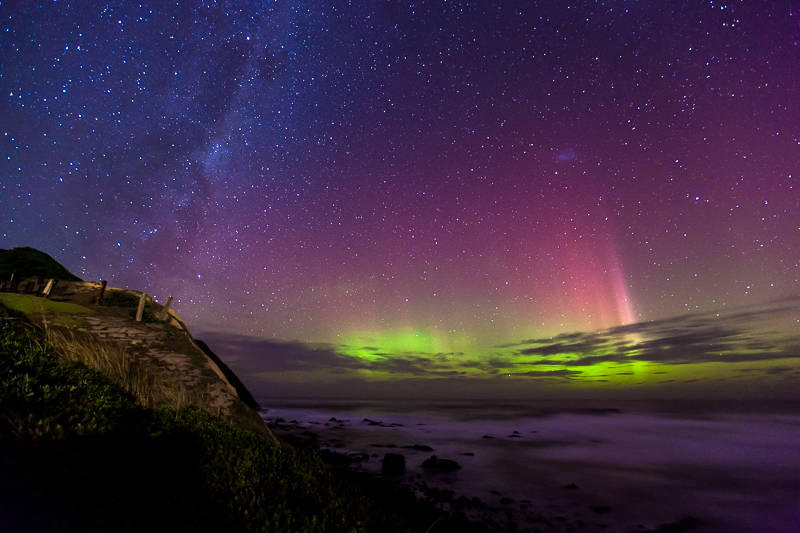 I’ve been researching the Aurora Australis since before we moved to New Zealand. I was lucky enough to have spent some of my childhood in Alaska, and because of that I grew up watching the beautiful Aurora Borealis so close to me I felt like I could touch it. When I found out the Southern Hemisphere delivered the same phenomenon (just not so close or visible), I knew I just had to try and photograph it.

The Aurora Australis (Southern Lights) are a bit rarer to view down here than the big Borealis is, and many people joke that Australis is Borealis’ ugly stepsister. I feel like the poor Australis gets a lot of flack for it, but it’s only because where New Zealand (and Australia) sit on the map degree-wise is quite a bit different than where upper North America sits. We can only see Australis to the south down here (always gazing it on the horizon), where as up north Borealis directly overhead.

The Aurora Australis is quite a bit dimmer than Borealis, and usually isn’t visible to the naked eye unless there is a geomagnetic storm of above a G5. If you’re interested in learning more about the aurora, I would highly recommend checking out Aurora Alerts. Anyway, last night was predicted a G5, so all of us aurora lovers were waiting on the edge of our seats for the show to begin. I wasn’t seeing much outside, and a bit of sea-fog was dashing my hopes fast — then aurora sightings all over the south island started popping up on Facebook. No one was posting anything in Dunedin, but I could go outside and see the stars, so I figured there had to be something out there right?

You should probably know that Dunedin night skies are 90% cloudy all the time, and seeing the stars in their full glory is a rarity. There have been quite a few other amazing aurora shows here in New Zealand that we’ve missed due to being “clouded out.” I did a test shot off my back deck for the heck of it once the sightings started coming in, and about died of a heart attack with what I saw: 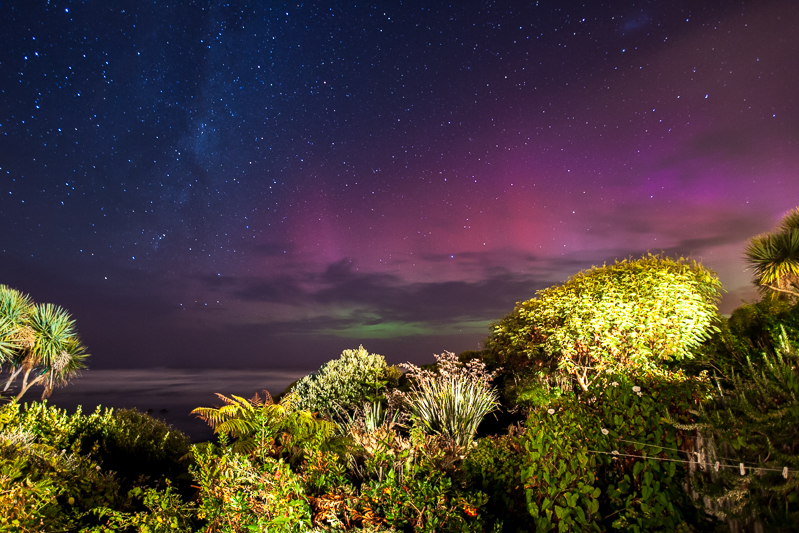 I’m pretty sure Derik probably thought I was off my rocker when burst through the back door shouting, “We have to get in the car RIGHT NOW!!!!” I frantically ran around grabbing my outdoor gear, camera gear, and shoes. Thankfully he found the whole thing comical and grabbed the keys as we headed out to our first location.

It only took us 15 minutes to find our golden spot, and we settled in for a beautiful 40 minute show. I only wish I had done a camera test earlier as the best lights last night were about 20 minutes before I got to them. Photographing the Aurora Australis was a dream come true and a check off my number one bucket list item! I feel so lucky (and still giddy) to have been able to see such a gorgeous phenomenon in person! 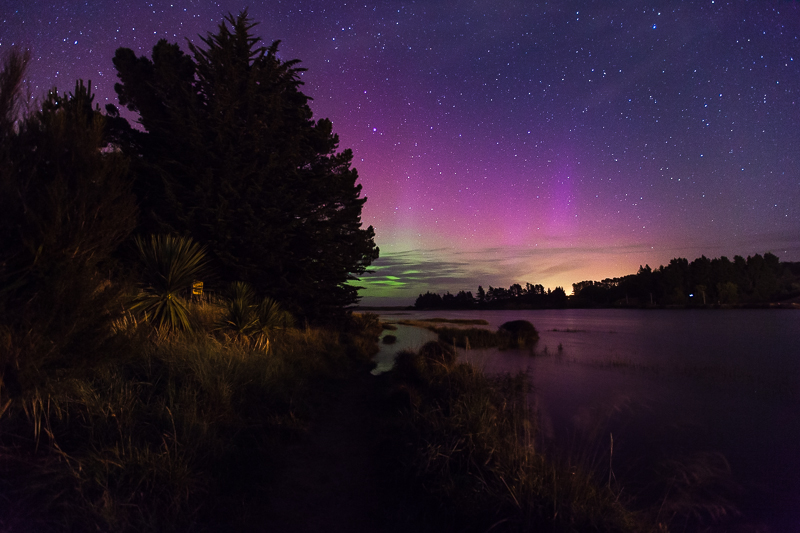 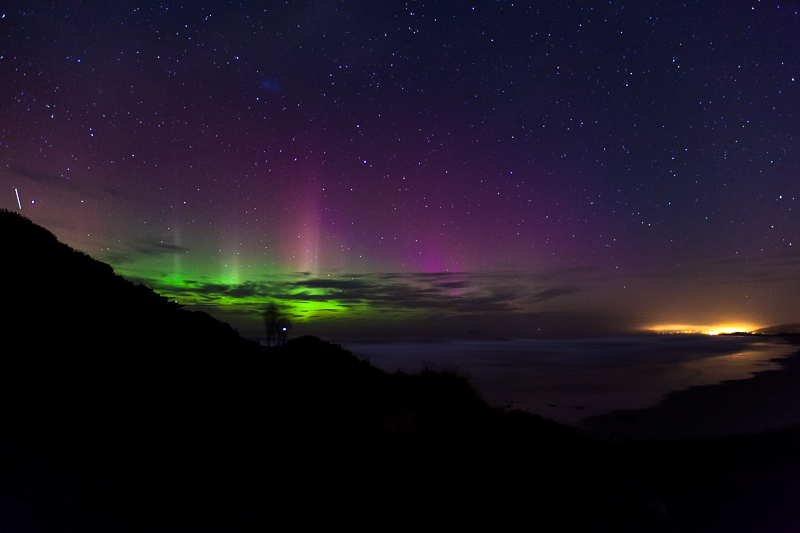 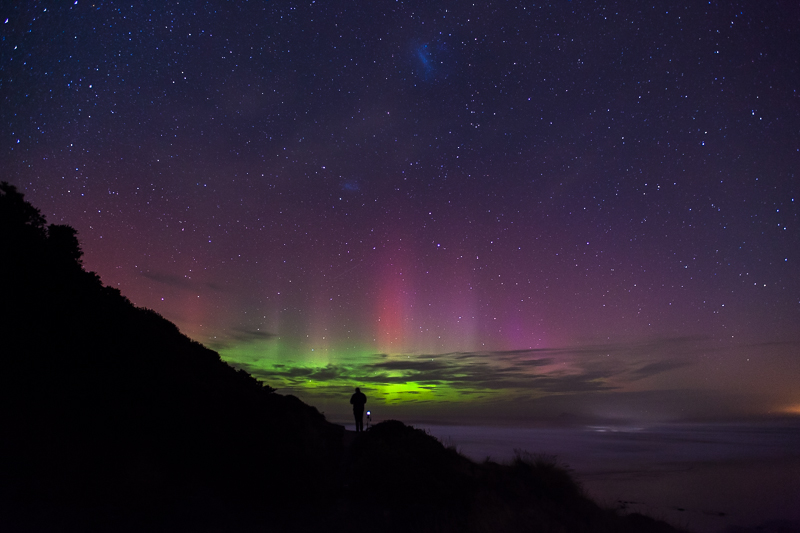 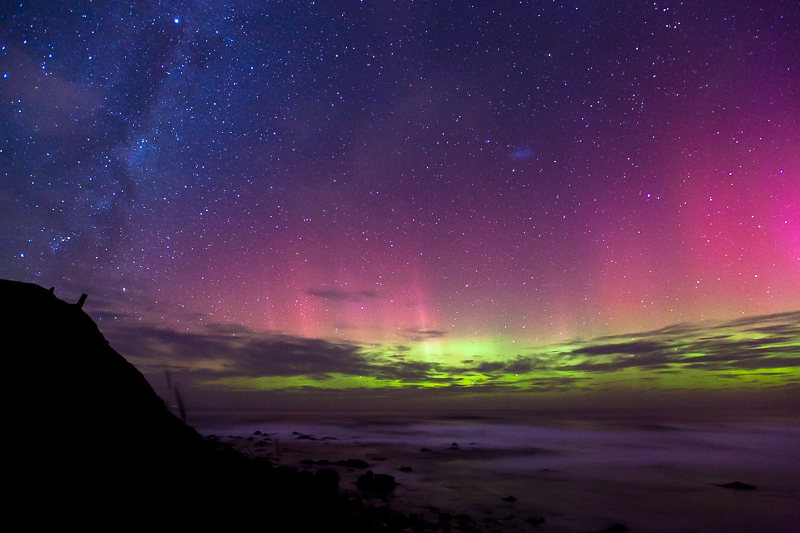 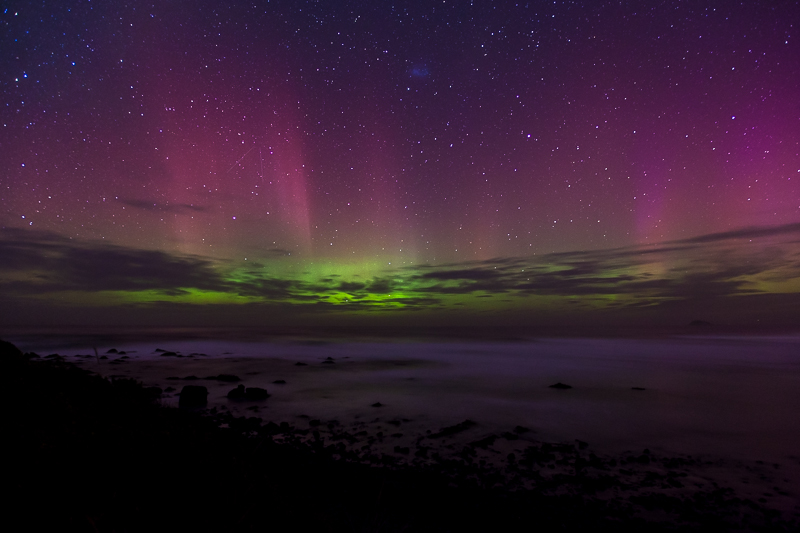 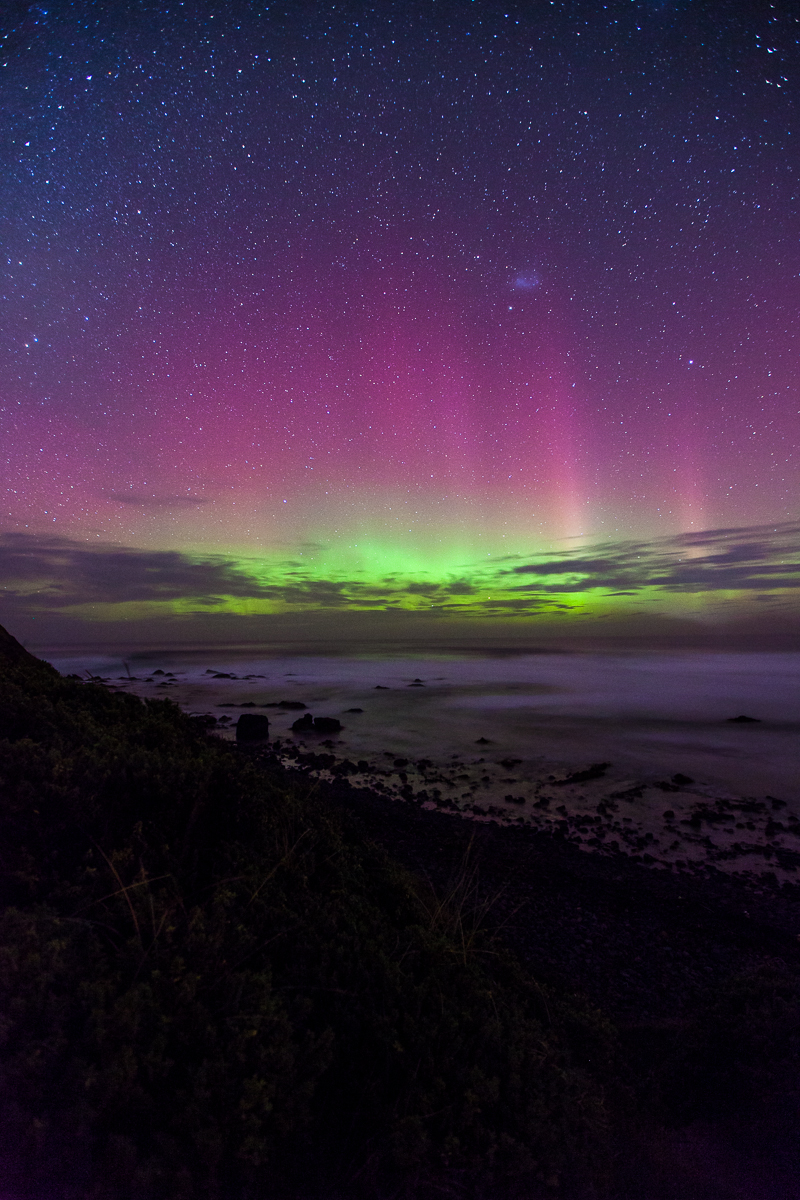 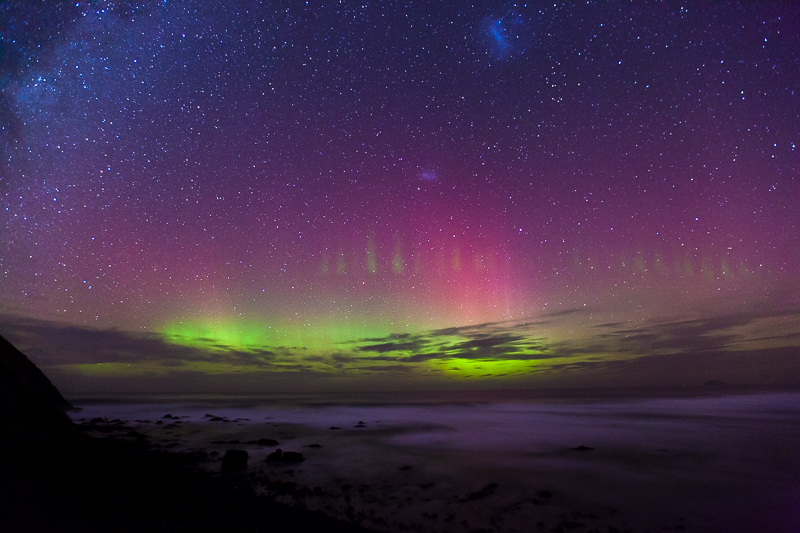 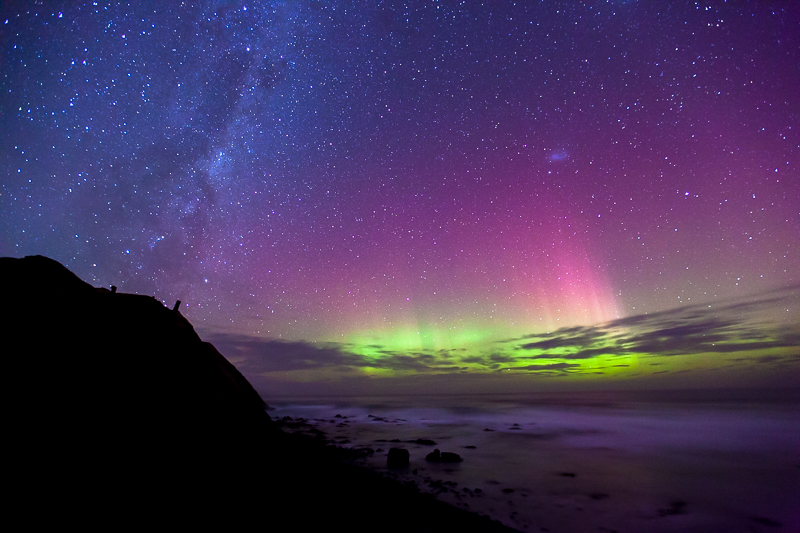 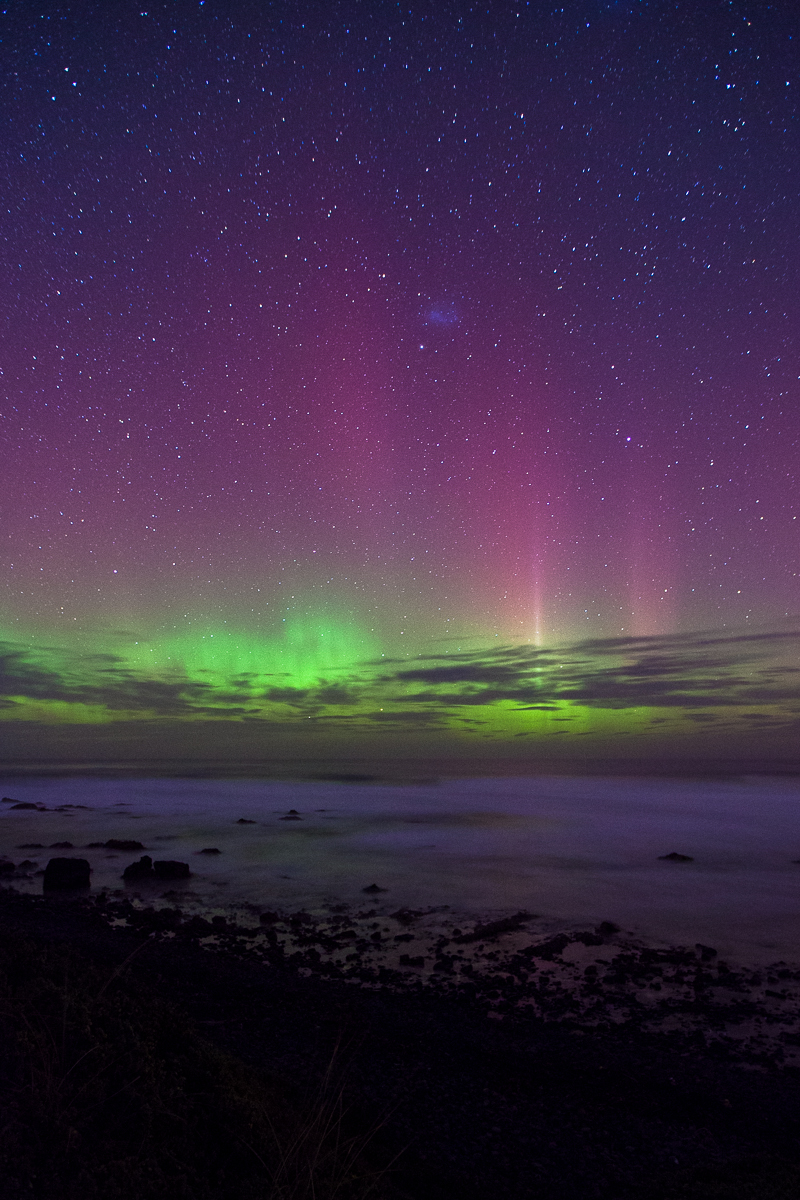 p.s. This has nothing to do with aurora, but  Travel Blog Success is offering 30% off their memberships until Friday night at 11:59pm EST! I have nothing but amazing things to say about TBS, I only wish I had joined sooner. If you’re wanting to get your travel blog off on the right foot in all aspects: technical, monetary, and engagement, you NEED to take their courses. They offer over 27 lessons on travel blogging, have an amazing private Facebook group in which you can ask all your questions (seriously, I’ve learned so much on it), and also have an opportunity board for those travel bloggers seeking media trips, guest posts, and more! Go sign up, you won’t regret it!