I hate to say it, but I was not looking forward to this one. I spent the entire week before our ‘camping trip’ dragging my feet and complaining how I didn’t even know the family we were going with. I emphasized the words camping trip, because after being here a year and a half I’ve realized Korean camping and American camping are two different things. For example, many Koreans take a tent to the beach during the day and set it up, bbq grill and all, for a few hours in the sand and consider it camping.

Anyway, back to my story. Derik has known this family for a good six months if not longer. The girls (Bella and Sally) speak pretty good English, but the dad and mom can hardly say a word (I don’t blame them…English is HARD). Derik has built a special relationship with the dad, and even goes out for dinner or drinks with him occasionally.

That’s how the camping trip was set up.

Not only was I a little less than enthused about going camping with a family I didn’t even know, I also wouldn’t even be able to communicate with the adults properly.  I then started having other worries: What would we eat? Where exactly are we going camping? Are they going to expect me to speak any Korean? They said to bring food, but how much food?

I reluctantly told Derik I would go, just because I knew it was important to him and his friendship with his buddy.

Looking back on the trip I did have a great time. I was thrown TOTALLY out of my comfort zone which stretched me a bit beyond where I was comfortable living in this culture. I think each expat makes a decision in their new place of living, which I have classified as one of four levels. The levels are:

Beginner–99.9% of the time most expats feel comfortable with the beginner level of expat. Not only do you get to travel and experience new things, but you bring your home with you. I’m talking Imessaging, Facetime, Skype, care packages, family visits, and of course you surround yourself with other expats exclusively.

Moderate-You are not willing to give most of your memories from home, but you are a little bit more adventurous. You’ll take an occasional cooking or language class, but still feel comfortable spending a lot of your time with those who have similar lifestyles and interests.

Advanced–You love learning new things. You are friends with both the locals and expats. You enjoy eating local traditional food, but definitely appreciate a good ol’ fashioned American burger or steak. You challenge yourself to learn the language and culture, but it’s not your first priority. What can get done in your free time is awesome.

Expert–You like your current country of residency almost more than your own. Heck, you may even consider getting dual citizenship (if only it were that easy). You spend your nights studying the culture, language, and customs. You have more local friends than you do expats. You love new things and new adventures…and rarely wish life could be the way it used to.

I would consider myself somewhere in between moderate and advanced. In no means would I consider myself an expert in any way, shape, or form. Maybe that’s why this camping trip was such a terrifying thought for me. Would I do it again? Not sure. Here’s what went down.

We met up at Mr. C’s (that’s what I’m calling the dad) screen golf center, and loaded up all the goods. I couldn’t believe the amount of things they brought for one night.  They had way too much stuff to fit in their car, so half of it was piled into ours.

We spent a good 40 minutes driving, and ended up at a dead end fishing harbor. When Mr. C told us we were basically camping on the road (aka slab of concrete) Derik and I stared slack-jawed. We were second guessing our decision to leave the yoga mats at home. Sleeping on a hard, concrete bed in nothing but a mere sleeping bag wasn’t exactly ‘ideal.’ But we rolled with the punches and pitched our tent in no time.

In less than 15 minutes after arriving, the girls were already bringing us the goods they had found down by the rocks. Crabs, eels, bugs…these girls were hard core. Then one of the girls ate a small quarter-sized crab whole. WHOLE. This was not going to be an ordinary camping trip. 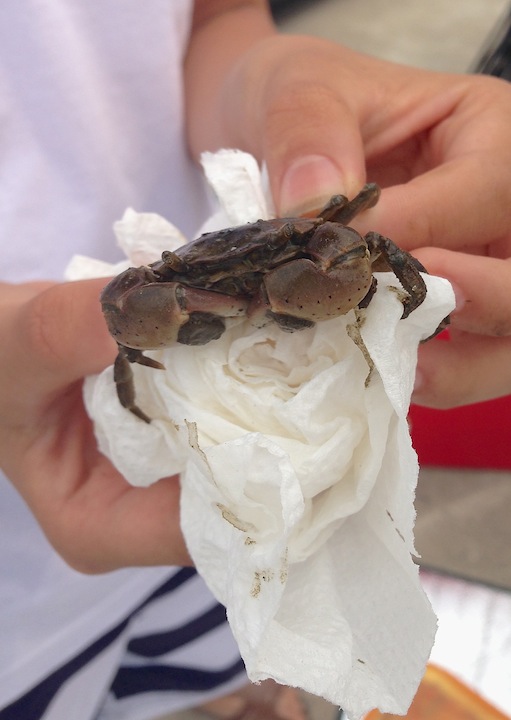 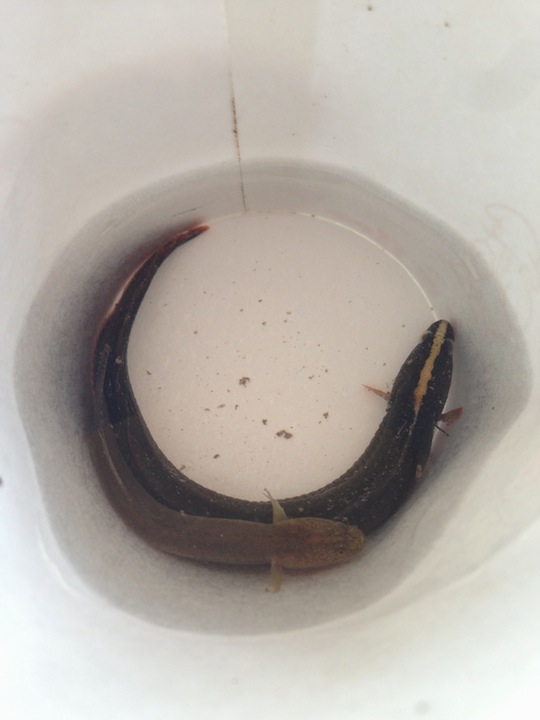 That’s when lunch came out. I knew I’d be in for a taste of all things Korean when I left for the camping trip, but I wasn’t prepared to eat cuddlefish. Don’t know what cuddlefish is? I didn’t either until this year. Go check out some images of these little guys. If you’ve eaten octopus or squid, imagine that only slightly crunchy and absolutely tasteless. I had to put large amounts of lettuce and sauce to get it to go down properly. 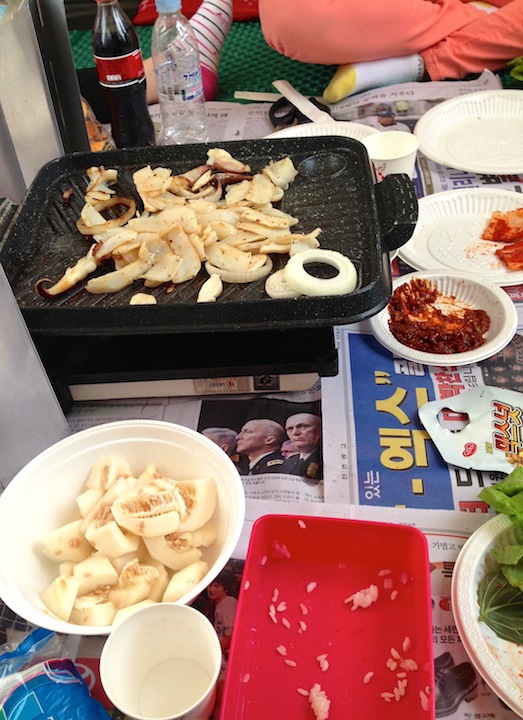 In the picture below, the bright blue building on the left is Mr. C’s distant cousin’s fishing shack. We went to go check it out and found tubs of fish, cuddlefish, oysters, and crabs. Our big surprise was when one of the men pulled out a flying fish. Derik and I were jumping up and down like little school kids at the sight of it. I was so excited I forgot to whip out my little iphone 5 to take a picture or a Vine  of it(shameless plug to follow me on Vine at : inanotherlangua). Derik also almost had to eat an oyster. Raw. The size of a freaking golf ball, with its white slimy goo oozing all over the place. I guess the look on his face and his nervous laughter clued Mr. C in on the fact that Derik wasn’t gung ho about it. Mrs. C came over and schooled Derik by slurping that sucker down in 2 seconds flat. We didn’t get by with much, because later Derik ended up having to choke down an oyster and myself a clam with dinner. If I end up being on that show ‘Monsters Inside Me,’ don’t be too surprised. 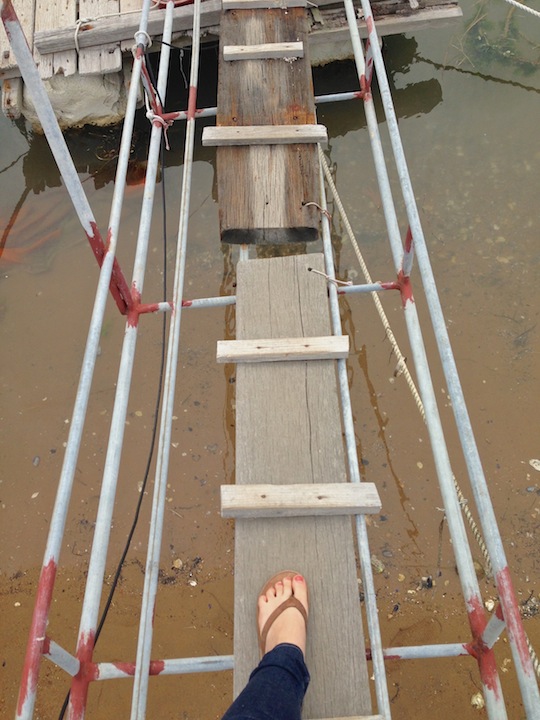 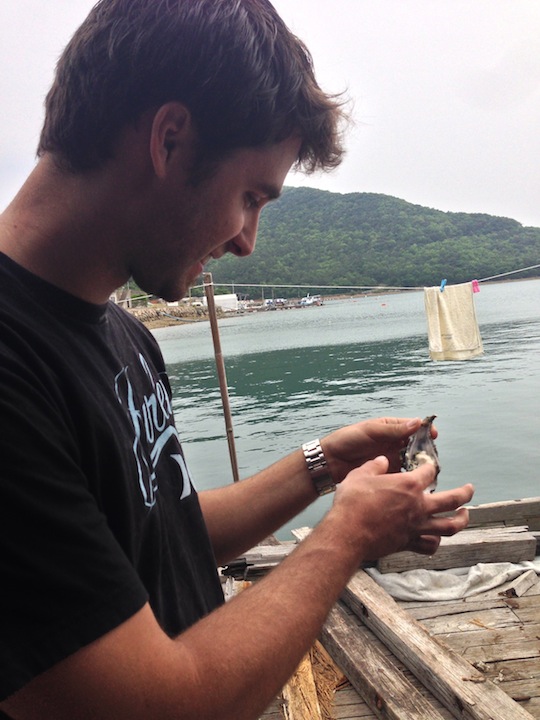 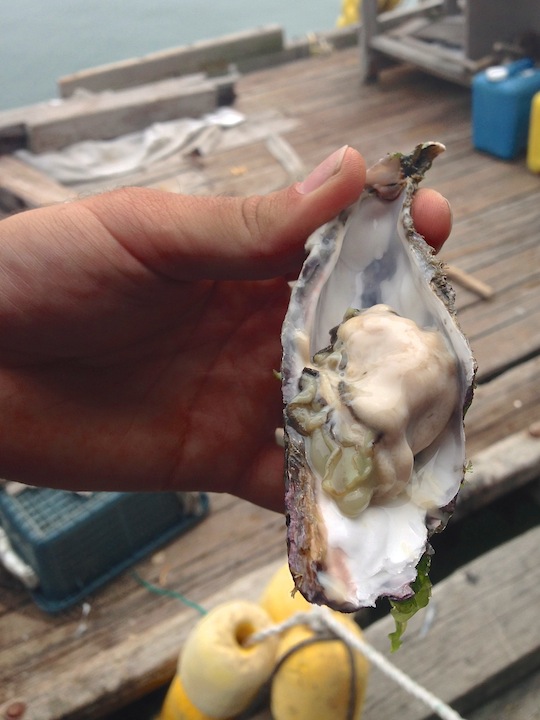 After that traumatizing experience we were elated to learn we were going fishing! Yes, something familiar to both of us. We both had fantastic luck and each caught a tiny little baby pufferfish. Mine was slightly smaller than Derik’s, but I had a TON of fun playing around with the little squishy, slightly slimy, fish. Especially since it would make cute little croaking noises and tried to puff up pretty big. Looking at the pictures below, I’m not quite sure how Derik managed to catch anything with his pole looking the way it does. ;) 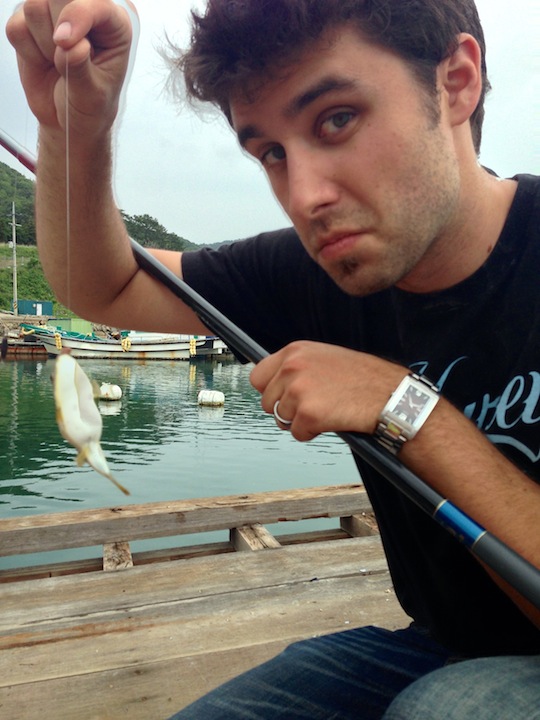 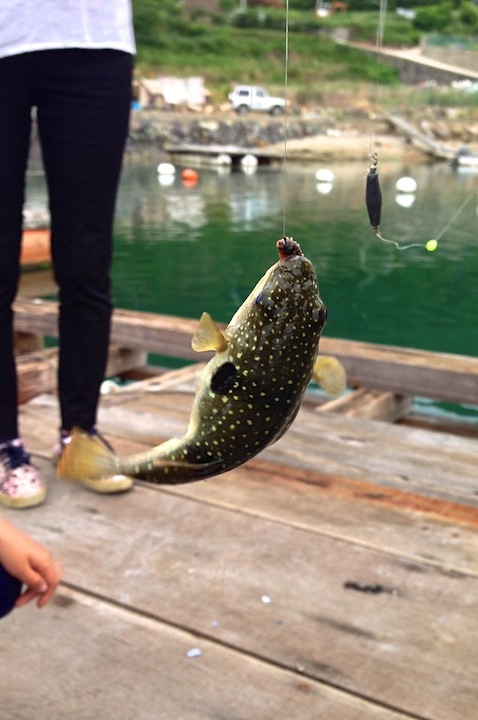 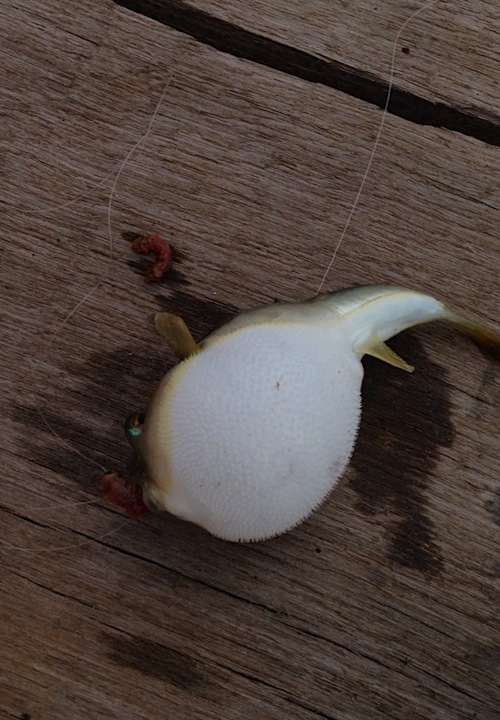 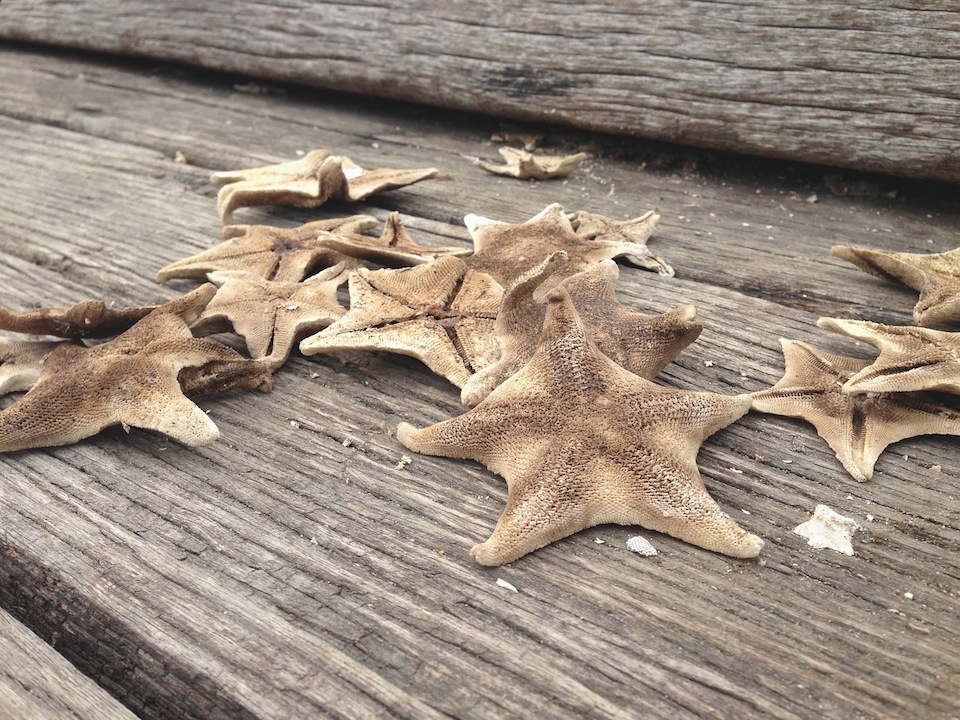 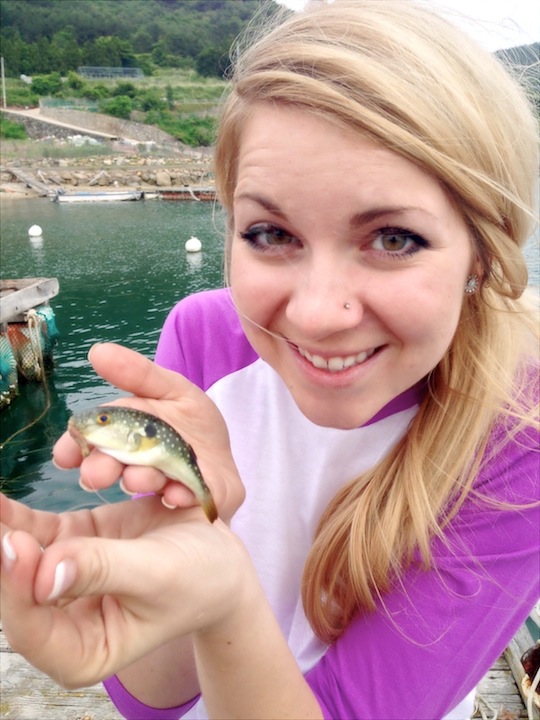 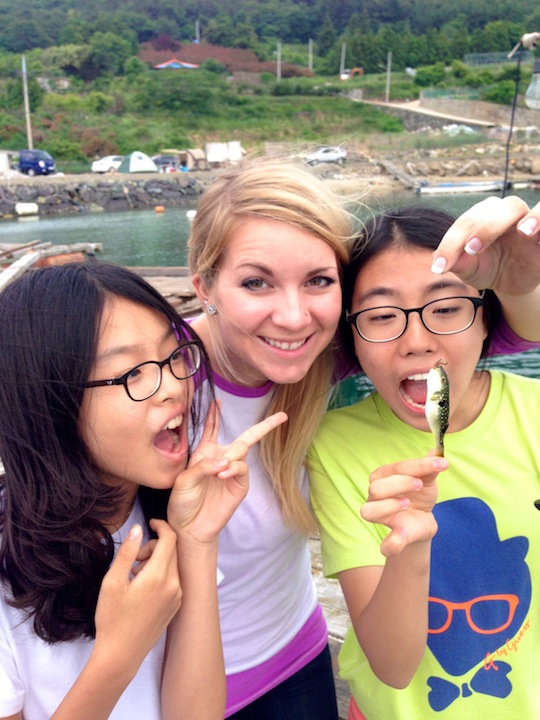 I am proud to say that after this trip I can be called by another title: Amanda, the jellyfish handler. Yep that’s right! After setting up camp on concrete, eating cuddlefish, eating a cold, slimy clam, and catching a pufferfish, I also had the cojones to pick up a sweet looking jellyfish. 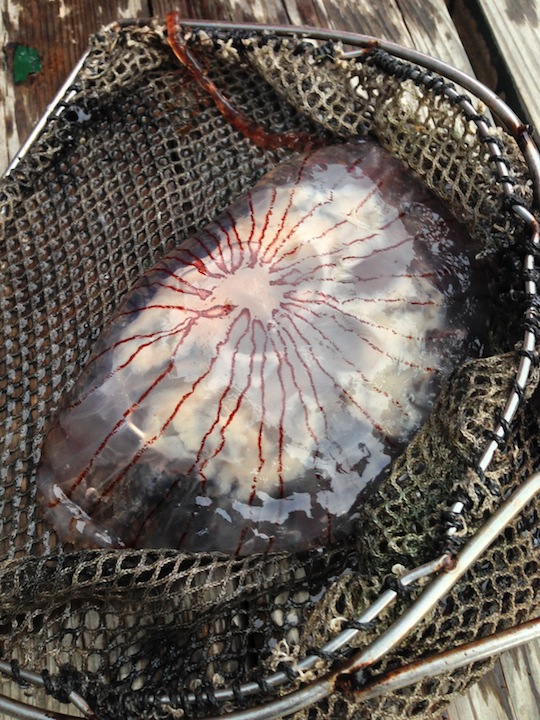 Just when I thought I was finally standing my ground on this camping trip, I was thrown for another loop. The weather. It started to get super windy and slightly sprinkle. Over dinner Mr. and Mrs. C discussed the possibility that it could rain throughout the night. Instead of packing up , the verdict was to bunk up in a tiny 8′ by 10′ room inside the fishing shack.

This was approaching a WHOLE new level of camping, as well as new definition to the relationship we were developing with this family I just met. Not only were there five of them (including a younger cousin that decided to join us last minute), but there were two of us…Americans (aka…tall). My mind was screaming, “No, no, no,” as I thought of us packed in there arm to arm like sardines.  In the same moment I heard Derik agree, “Yes that sound’s great.”

It took a few minutes to gain my composure, but I quickly found a solution to our problem. Our ENO hammocks. Thank goodness we had forgotten to take them out of my car on the last camping trip. The girls couldn’t have been more enthused to play around with them that night as we hunkered down in the smelly shack for the night. I also learned how to eat ramen the ‘correct’ way. Apparently you’re not supposed to eat it right out of the cup, but by using a small bowl you make with the lid. 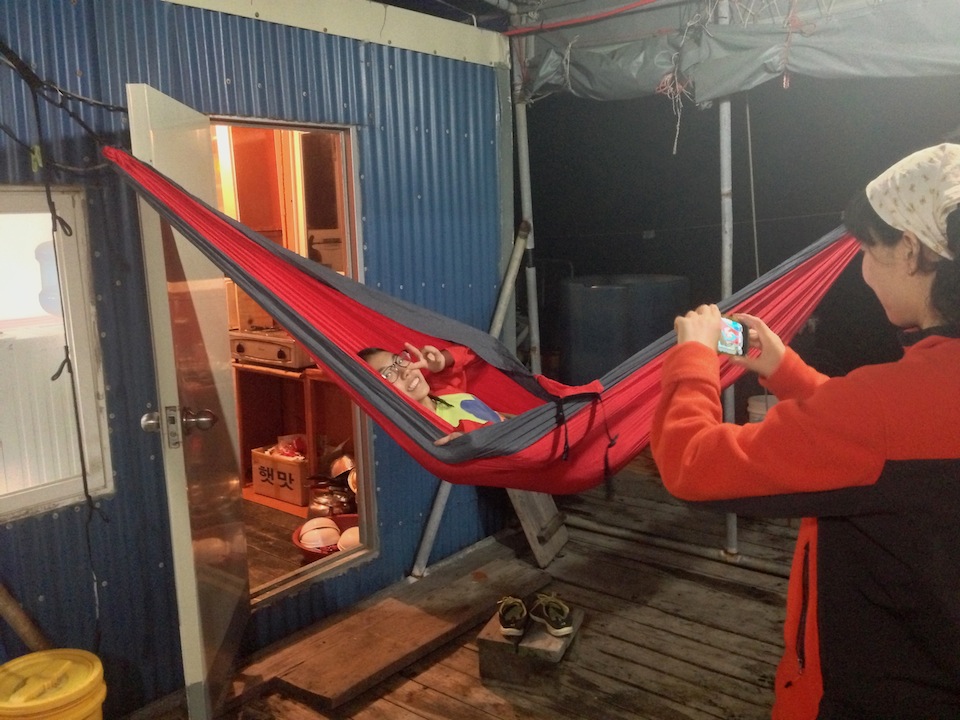 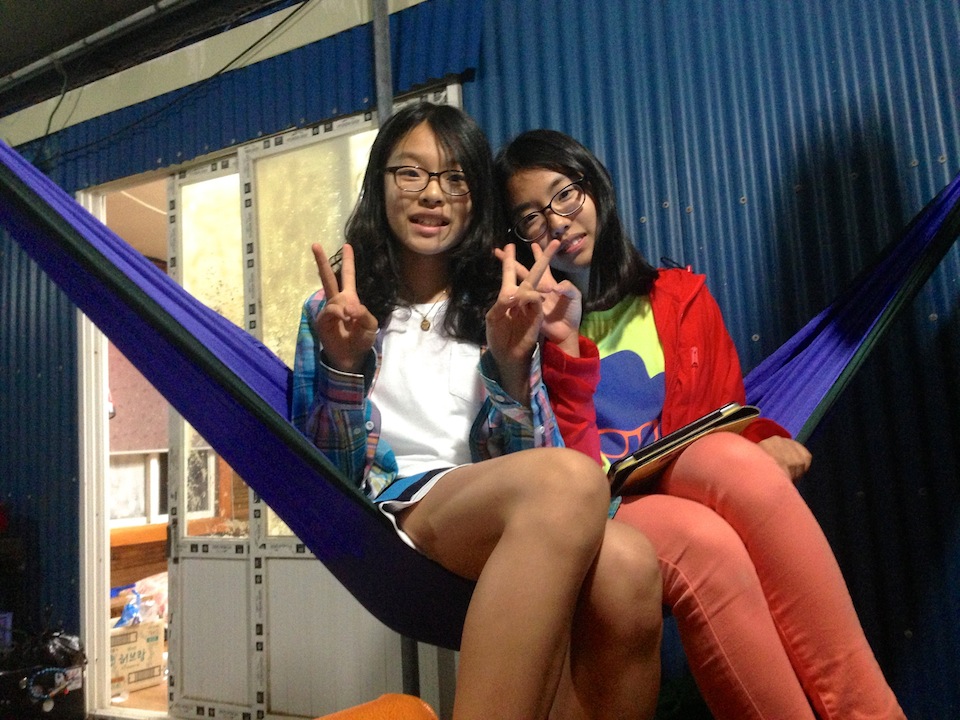 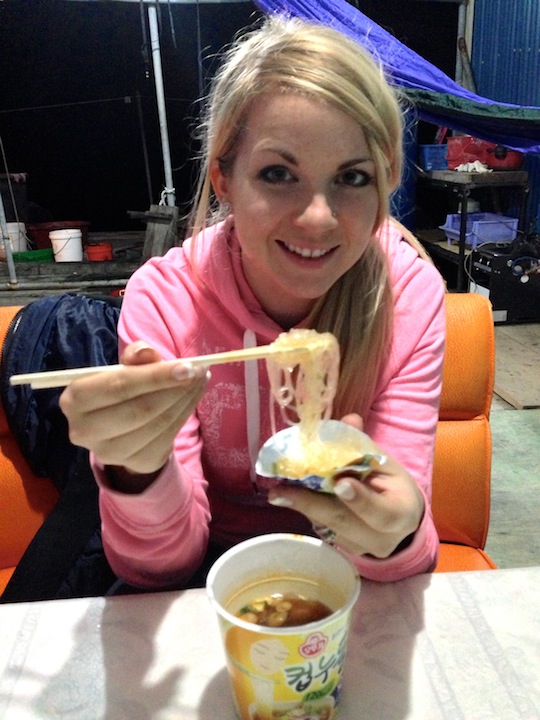 Sleeping didn’t happen that night. Between the mosquitos, the sea otters barking throughout the night (yes that happens), and the crazy gusts of wind that would throw everything around inside the shack, Derik and I spent the night tossing and turning. The morning came early at 5am. My stomach wasn’t feeling very good, call it the raw and boiled clams and the cuddle fish, or the knock-your-face-off soup we had for dinner, I was pretty much dying by the morning. Unfortunately the bathroom was a 15-painstaking walk away. 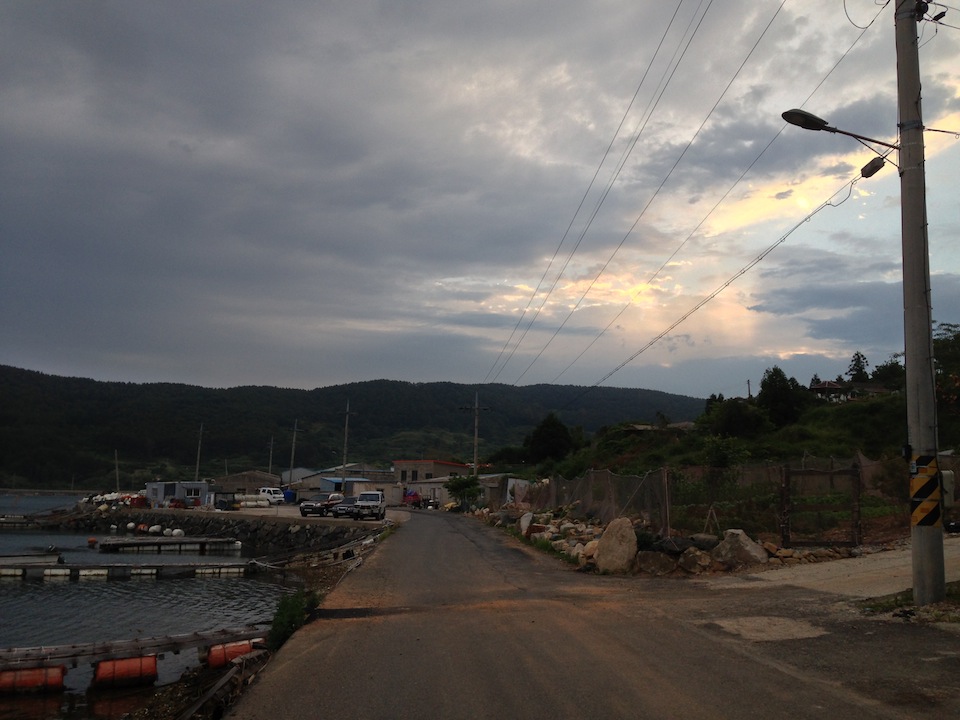 At least I was able to enjoy the beautiful sunrise as I walked back to my hammock. After I walked all the way to the bathroom and realized it was closed and locked up tight.

As I said in the beginning of this post, this camping trip was a crazy, incredible, weird experience. If I had the option of going back in time and doing it again or opting out, I’d probably do it. Just for the adventure of it. The C family was so nice  to us. What seemed strange and awkward to us was most likely very normal to them and their culture. Derik and I know they were laying out the red carpet for us and really trying their best to make sure everything was to our liking. I am very thankful for their willingness to take us out!

Now that it’s over I can sit here and make fun of the events that unfolded during our first official Korean camping trip. Sure it may have been an expat on level ‘expert’ thing to do, but I still had a great time.

What about you? Do you have any crazy stories about times you embraced the culture you are/were in?