In about two weeks I will take my first step onto American soil since Feburary of 2012. Actually, onto any English speaking country’s soil. The only places I’ve visited while in Korea the past two years have been places in Asia. I have fears. Mostly ridiculous, but they are there-looming above me like a cloud. Not a dark cloud, because I’m not scared, they’re just curious fears (that doesn’t even make sense but bear with me).    Don’t laugh to hard, because these are legitimately serious.

1. Have I lost my knack for speaking English? I catch myself all the time saying really weird things. In an average day I make about 50 grammatical errors in my speech, and painful ones at that. Sometimes I just have to stop talking because I get all sorts of confused. I’m not mad at myself though. I spend  8 hours a day talking to children that can barely tell me their own name in English. My husband works with older students, but he also has a hard time carrying on a normal conversation. Just in case you’re wondering what a conversation typically would be with the average English speaking Korean person (referred to as KP) we pass on the street, this is how it would go (pay special attention to the grammar).

KP (yet again a confused grunting sound, this time with a slight cocking of the head, you can tell they’re getting impatient): ???

Me: “America. I’m a Me-gook (means American in Korean).

Basically the gist of this conversation is to teach you two things. First, you have to have lots of patience. Second, the shorter you can make what you’re trying to say, the better it is. So instead of telling someone, “I’m from America”, or “I’m a me-gook,” I should have just said,  “Me-gook.” If someone asks me about my family, I’d better say, “Father, Mother, Sister, Brother, Husband.” instead of what’s more politically correct, “I have a lovely family. I’m happily married to an amazing man, but I also have a father, a mother, an older brother, and a younger sister. My sister’s married too and she has a little baby girl.” There is NO WAY that would get across, unless the person was a really good English speaker, which you can randomly come across. Let me tell you, when you find someone that speaks good English here, it’s like a breath of fresh air.

But then you’re bombarded with this sorta crap:

I’m afraid I’m going to sound like an idiot when we first get home (if not the entire time-two years of incorrect grammar usage is a long time to fix). I’m scared that I’ll be paraphrasing and over enunciating my speech, and it’ll be hard for native English speakers to understand. Either that or I’ve dumbed down my English so much people will think my vocabulary is that of a 6 year olds. Sigh. Here’s to hoping that the first few days Derik and I have alone can be spent regaining the speaking skills we have lost.

2. Are my mannerisms weird? What if I act like an Asian tourist? We all know what I’m talking about. If not, feel free to reference this post. What if I do weird things that only people in Korea do? Like: take a million selfies, try to use charades when asking for something, bowing to everyone out of politeness, and giving everything with two hands?

3. What if the food that I’ve idolized the past two years isn’t as great as I remember? I was talking to Derik about this one yesterday. I haven’t had American food in so long I’m wondering if in my mind I’m over exaggerating how good it is? I know all of you Americans out there are like, “Meh, it’s not that good,” but you haven’t been living off of canned corn and fermented cabbage. I’ll be letting you know about this one after I pay my visit.

4. Can my skin withstand the hot tropical ‘American’ sun? Weirdly enough, in the past two years my skin has stopped getting tan. I think Asia has this weird ‘white skin’ effect on me because all the women want the whitest skin possible. Maybe Asian sun actually isn’t as hot as people say. One of my friends (who is very careful about the sun) told me how terrible and fierce the sun was in Vietnam. When we visited, I was careful to put on sunscreen, but I didn’t get burnt (or even tan) the entire time we were there. WHAT IS UP WITH ME. Maybe Asian sunscreen has superpowers.

5. Will I get eaten by sharks? It’s funny, but after living abroad for a while, America kind of becomes a scary place. You hear the world’s perspective on American violence, and of course you only hear of the most traumatic things that have happened. Seems like one of the only things (besides Obama, shootings, and train derailments) the world news likes to cover about America is shark attacks in Hawaii. Frick. They go on and on about how there has been an abnormal amount of attacks this past year and no one knows why. Derik has decided he’s only going in the water while inside a shark cage or on a big boat. Ok I’m over exaggerating that a bit, but basically he doesn’t want to leave this world as shark food.

Me? I guess if I was going to go, I’d rather go by a shark then by being burned alive in a car accident. At least people will have something cool to talk about.

6. What if American customs won’t let me in? Or take something from my backpack? I can’t even remember TSA rules and regulations anymore. Can I take my razor? Hairbrush? Nail file? We pretty much get away with murder here in Asia. We just flash our US passports and barely get our bags checked. <<SPOILER ALERT:Dear Brother, if you’re reading this I’m about to give away your Christmas present so skip the rest of this paragraph>> I have a bottle of snake wine with a real dead snake inside for my brother, and I’m worried the customs agents will take it from me. If they do, I’ll be pissed. I really want to see him drink it (while I film it to upload on Instagram of course).

7. I’m scared to go to the hair salon. I haven’t walked into a professional salon (or any salon for that matter) in two years. Also I’ve been without shampoo for a year. When I go to Hawaii I’ll be dropping by the hair salon. I’m scared to see what the stylist will say about my hair. Is it horrendous? Is it dry? Is it greasy? Is it just weird? How much will they want to cut off?

8. What if I don’t dress stylish anymore? This is totally a girl moment of mine. I worked at American Eagle for 4 years in college and did overnight floor sets in Oregon right until we left for Korea. I kept my sweet 40%-50% off discount for 5 years, and I was ALWAYS wearing awesome new stuff. Now, living in Korea, I don’t even know what the style actually is. Although Asia is probably years ahead of the US in fashion, to be honest, I’m not sure if there actually is one particular dominating fashion style in Korea. Trust me, if you’ve ever visited Korea for 5 seconds you’d see this.

Also I haven’t been able to purchase that much new clothing in the last few years, so my stuff is getting pretty worn and I’m assuming outdated? Luckily for me, I stick to mostly solids. That’ll help.

9. I think it’s awkward to eat with a fork now. My husband and I use chopsticks for a majority of our meals. Sometimes we go to a restaurant the waitstaff will give us forks and knives out of compassion, but  the silverware just feels heavy and cumbersome.  It’s actually easier now to eat with chopsticks.

10. Will I be a terrible driver? It’s no small secret that the driving over here is absolutely terrible. I expect the worst out of any given moment, and nearly have disastrous incidents every time I’m driving. It’s a miracle to me that there aren’t more accidents. The picture below is a three lane street in the middle of one of the largest cities in Korea: Busan. WHAT IS THIS?! 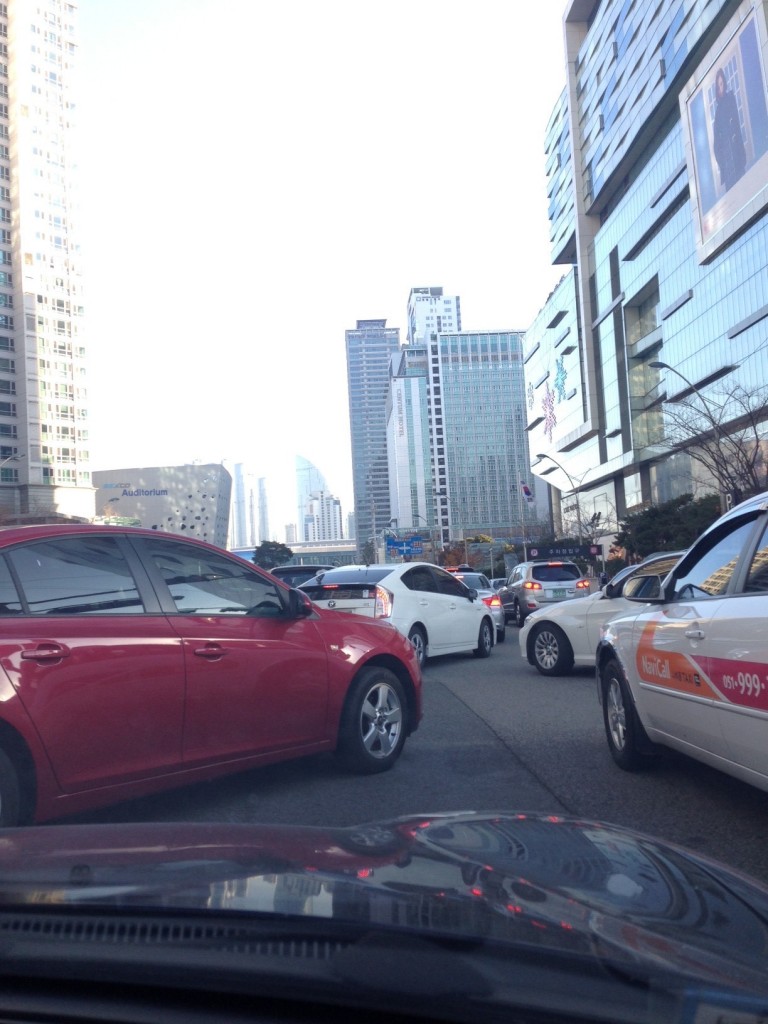 I don’t know how many times I’ve almost  been sideswiped because someone wasn’t looking over in my lane while they were merging into it. Traffic laws are more of a suggestion and are rarely enforced. Will I remember to completely stop at a red light and just wait patiently until it turns green? Or will I make a complete stop and then go because no one is at the light? Yikes.

How ‘American’ are my husband and I? I know we’ll blend in just fine since we’re going to Hawaii (a land filled with diversity), but it’ll be interesting to find out all the ways we stand out due to our expat life.