Derik was hired on at DSME Shipbuilding last fall, so this meant he would be transitioning legally from the private school to the government company…DSME would be in charge of his visa and paperwork. Unfortunately his paperwork was shoved aside…and before we knew it, Derik’s visa expired.

It was quite frustrating finding out (even after asking multiple times) that the people in charge of his paperwork let it fall through the cracks. Worst of all, neither the school or DSME were claiming fault for it. So that meant Derik and I would be 100% financially responsible for getting a new visa…even though we did everything right.

One thing we have learned about living in South Korea is that: without flexibility and an open mind…you’re not gonna get very far. You somehow roll with the punches and keep going.

He took the first trip to Japan by himself…and by ferry in January. It was a short little trip, only 2.5 hours by boat to reach his destination. He literally had to step off the boat, hand the customs officer his old alien card, and step back on. Wow quick trip eh?

For his second trip, Derik and I decided to make the most of the frustrating and unfortunate situation, and go on a mini-vacation. Thankfully my boss at ECC was incredible and she let me off work for a few days.

Unfortunately right before we left, Derik injured himself pretty badly…twisting his ankle and ripping all four of his ligaments in his ankle. One ligament was torn almost all the way. He was on strict orders to stay off the ankle and had to walk around everywhere in crutches.

After a few trips around town in Geoje, we realized walking and traveling around Japan would be nearly impossible with his injury. We decided to stay in the city of Osaka, Japan…due to the fact that the Korean Embassy was pretty easy to find and it didn’t seem like the walk would be too long or hard for Derik.

We left on a Sunday out of Busan (only 45 minutes away)…and were greeted immediately by AirBusan with a smiling face and a wheelchair. Derik couldn’t be happier…this meant he wouldn’t have to painfully walk around on those crutches in the airport! 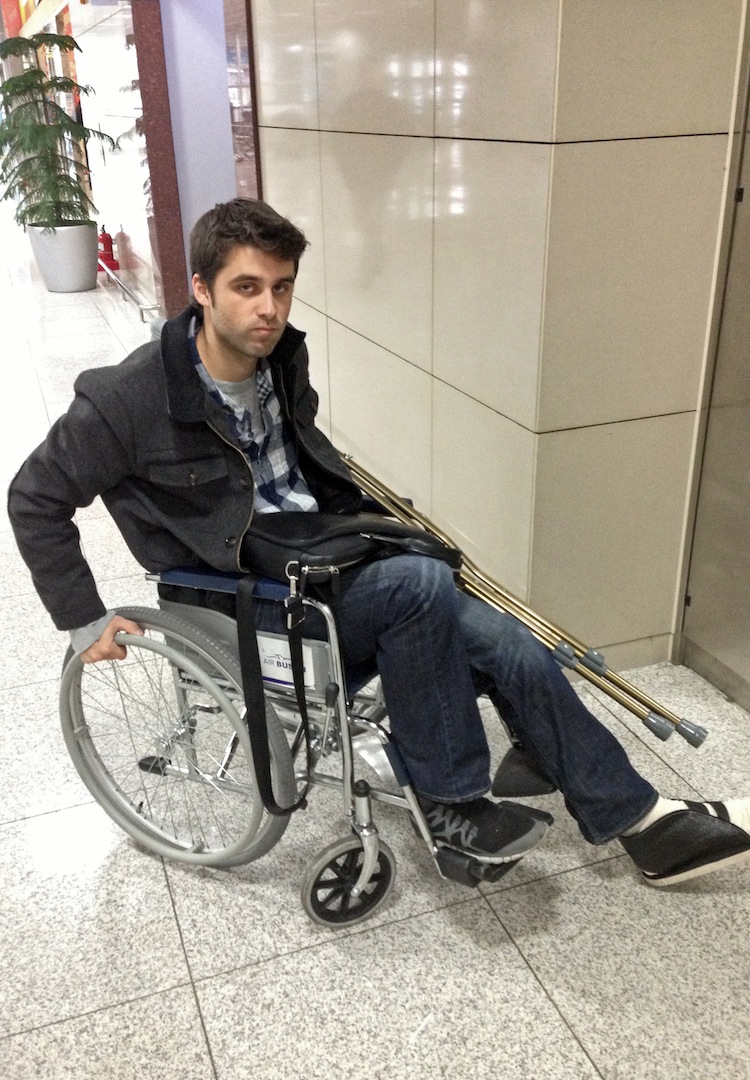 Best part of all, we went through priority security and customs, we were upgraded to bulkhead seats, and we got to board first!

The flight only took a little over an hour and we were landing in Osaka. Immediately upon arrival, we had staff waiting for us with a wheelchair. They not only pushed Derik around for me, but we got to go through priority immigration, and the AirBusan staff brought our checked luggage right to us!

The lady that was pushing Derik around was so nice. She even helped us with our bus tickets to the station near our hotel. This was a relief for us…we had no idea how the heck we were going to get there, and the bus ticket vending machines were all in Japanese.

For the past year people had repeatedly told us that Japan was expensive…more than what they were expecting. Derik and I were on a budget, especially after this unplanned trip, and were trying to keep our mini-vaca as cheap as possible.

I’d have to say, after our trip, it wasn’t as bad as I thought. This also taught me to keep an open mind about where you’re traveling-don’t let your opinions take control of your perception of a country just because of what someone said.

The night before we left, I went to Agoda.com and quickly found a last minute deal on a four-star hotel (Hearton) for only $65 dollars a night. It normally goes for $315 a night…so that was pretty much a steal-of-a-deal. Going cheaply yet still fashionably? It can be done folks!

Our hotel room was small but really cute and modern. In fact, Osaka, Japan in general is modern. I absolutely love the architecture; I couldn’t help but drool at the futuristic buildings, lighting, and style. Before I even got off the bus to our hotel I fell in love with Japan.

Food-wise we also went for cheap. The first night we were petrified that food cost was going to be stupid crazy, but we quickly found out it wasn’t bad either. We ate instant soup (yeah nutritional right? eeeehh…) and edamame for our first dinner. Derik also bought all the ingredients to make a type of spaghetti (using macaroni noodles) in the electric kettle. The second day we went out and had strawberry shortcake for breakfast. (Um….YUM)

Derik and I came to a general consensus… food in Japan is good. Real good! I’ve gotten so used to eating food in Korea (spicy and not very much of a selection), I was soooo appreciative of the variety of food in Japan.

The second day (on our search for the Korean Embassy) we found a Mcdonald’s. I’m not a huge fan of the overly-processed, fatty foods they serve…bit It is fun to go to Mcdonald’s in different countries. I like to see what sorts of new items are on the menu.

The Mcdonald’s in Korea have English subtitles, and in Japan that is not the case. We weren’t really sure how to order, or what the heck we were ordering, so naturally, when we saw the BIG TEXAS burger meal on the menu we both got one. Let me just say it was a very good choice. I haven’t had a burger that delicious in over a year. It not only had BBQ sauce, but it had fried onions!!!! 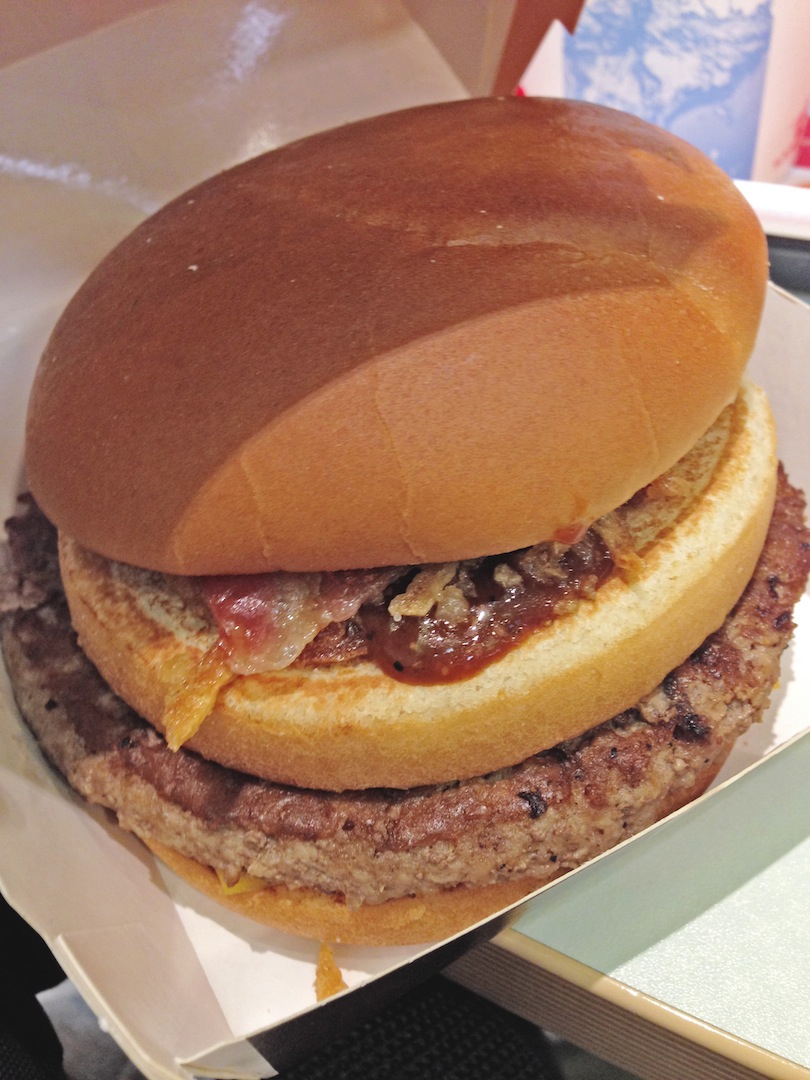 Now that I’ve made myself hungry, let’s move on past food.

The second day was a rainy day. The weather gave an added challenge for us with Derik on crutches, and I had to hold an umbrella for him and one for myself. After a funny incident with getting on the wrong subway car, we ended up at the Embassy. 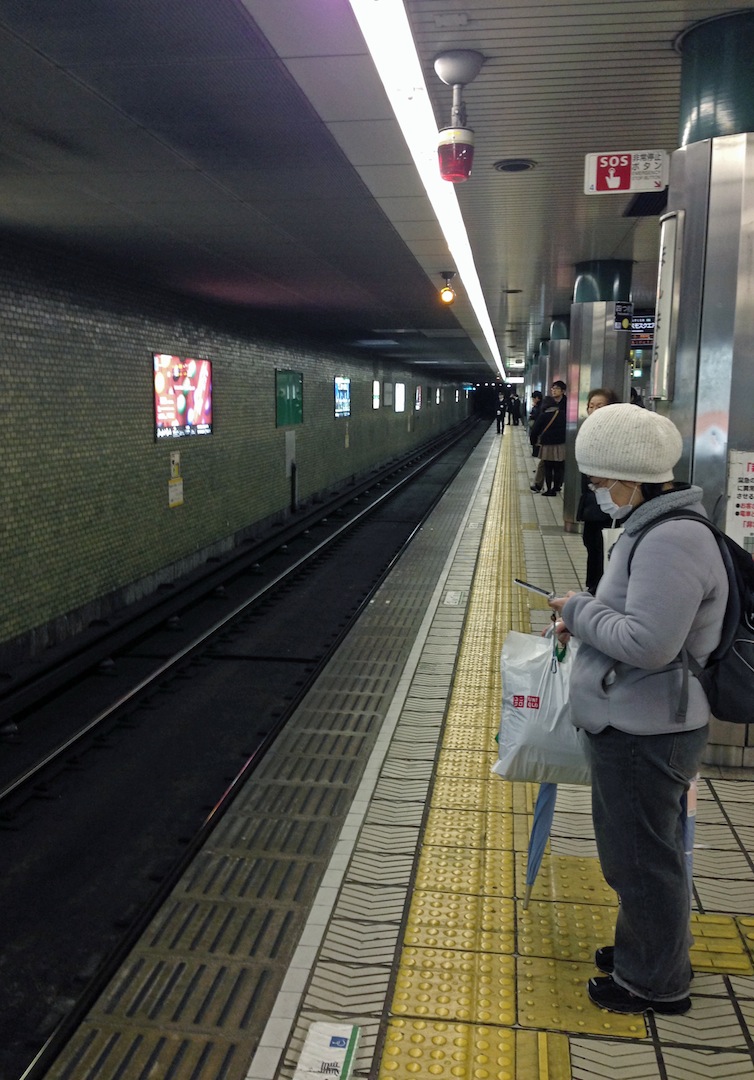 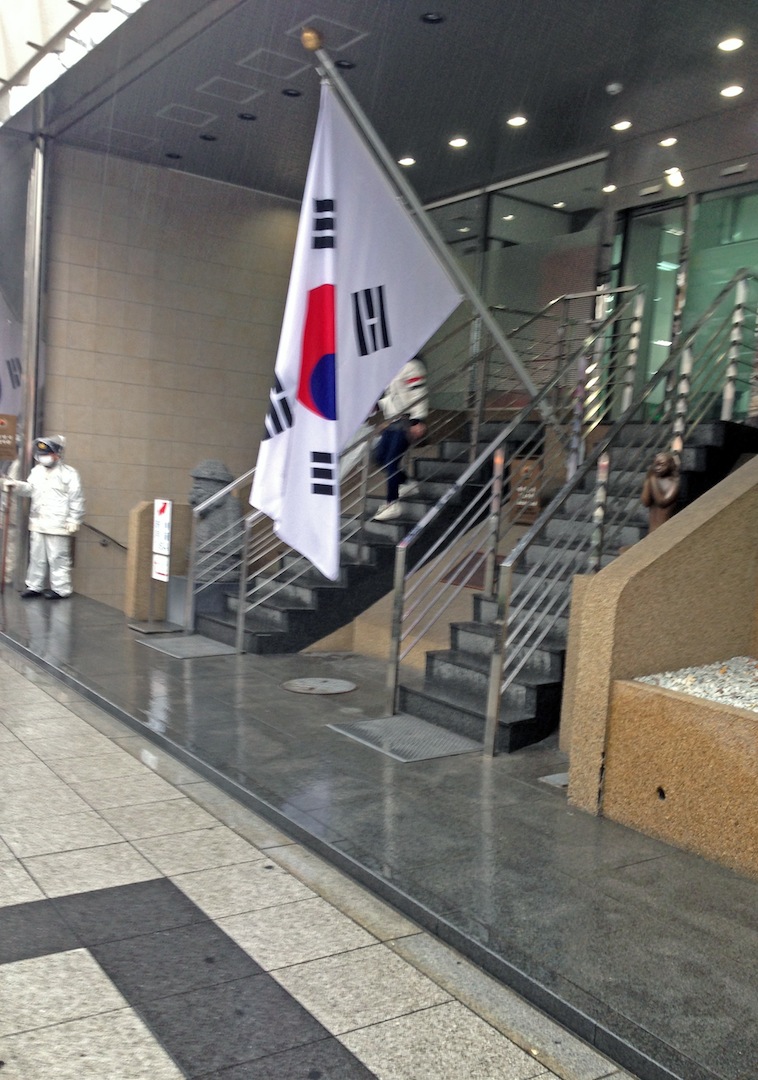 We were able to get the visa paperwork done in record time and without incident. Thank goodness, because if we had some sort of hiccup…I’m not sure Derik would have been able to handle it. ;)

We then headed over to the Osaka Aquarium Kaiyukan where we spent the rest of the day looking at fish and playing around. Derik was able to get a wheelchair, which was a relief for both him and myself…his foot was swollen to 3x its size by then.

I already posted part one of our Kaiyukan tour…highlighting the jellyfish display. If you haven’t checked it out yet, please do!

We spent 4 hours inside the aquarium, and then we waited until dark to ride the Tempozan Giant Ferris Wheel next door.

It cost us about 12 dollars as a couple to ride, but it was worth it! You sit in glass ‘houses’ and I’d have to admit it was a little freaky! Even the bottom panel of the house is glass, so you can easily look straight down. The Tempozan boasts 112 meters high, and was the tallest wheel in the world in 1992. It’s since then been passed up by 4 other ferris wheels. 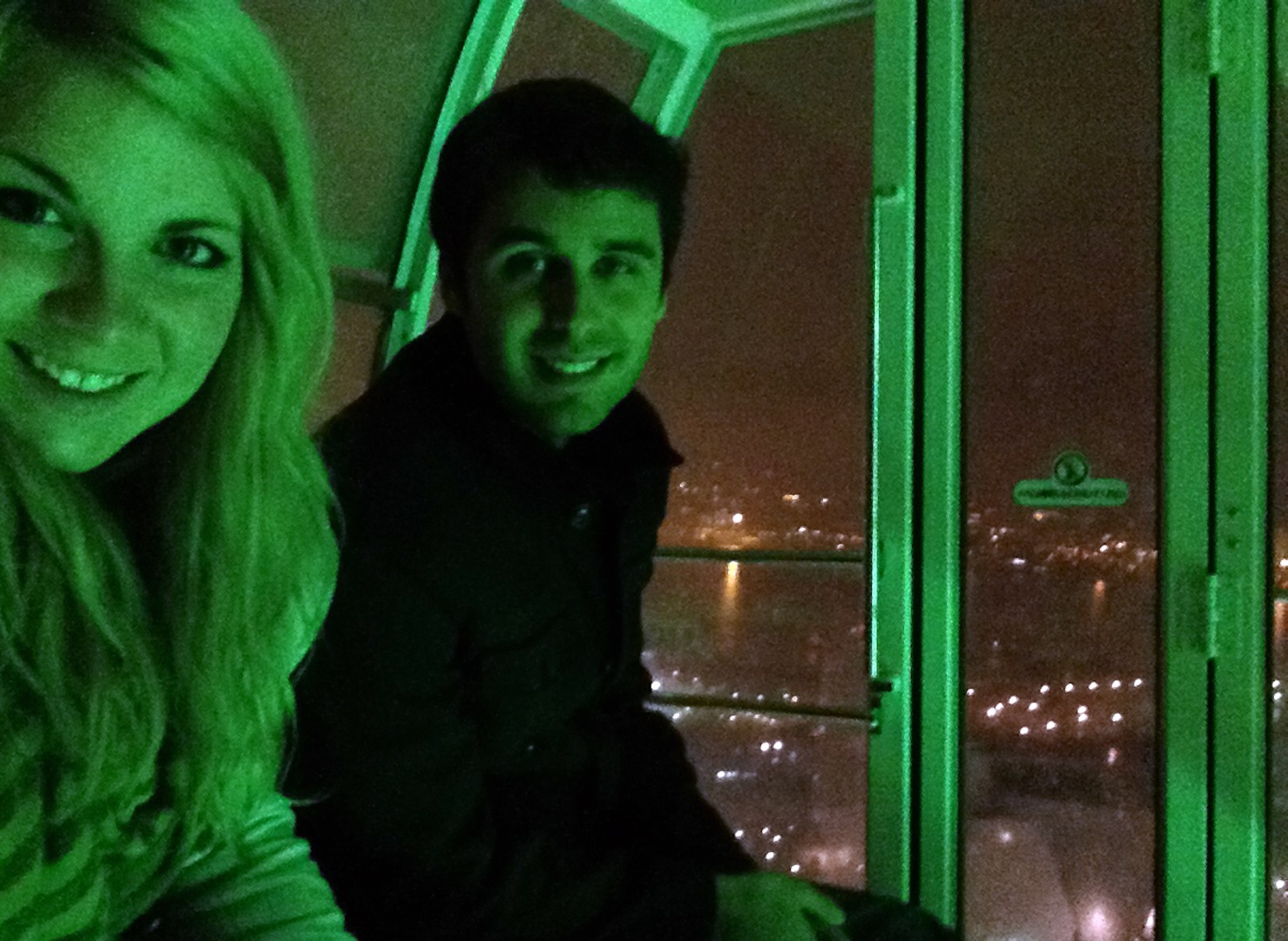 The ferris wheel ‘houses’ below are some of the more conservative ones. There were only 5 all-glass houses…which we were lucky enough to get!

The trip to Osaka sped by quickly. Before we knew it we were waking up to our last day there. We had absolutely no agenda, so we decided to check out Universal Studios Japan. It only cost about a dollar to take the JR train there, which was again, cheaper than I thought.

We had a total blast at Universal; I’ll be making a post about it soon I promise!

By the end of the trip we both agreed that we’d be visiting Japan again in the future. I can’t wait to go back and explore the historical sites as well as more of the culture!