In the (almost) two years I’ve lived in Korea, this country has taught me a lot. I’m beginning to learn certain customs and ways of life, and some things seem pretty bogus to me, but there are a few things Korea has given me a new mindset about.  Below I’ve listed the top 10 things Korea has taught (the good, the bad, and the bizarre) me-in no particular order. I’ve mixed the bogus with the more practical…I’ll leave it up to you to decide what’s important to know. 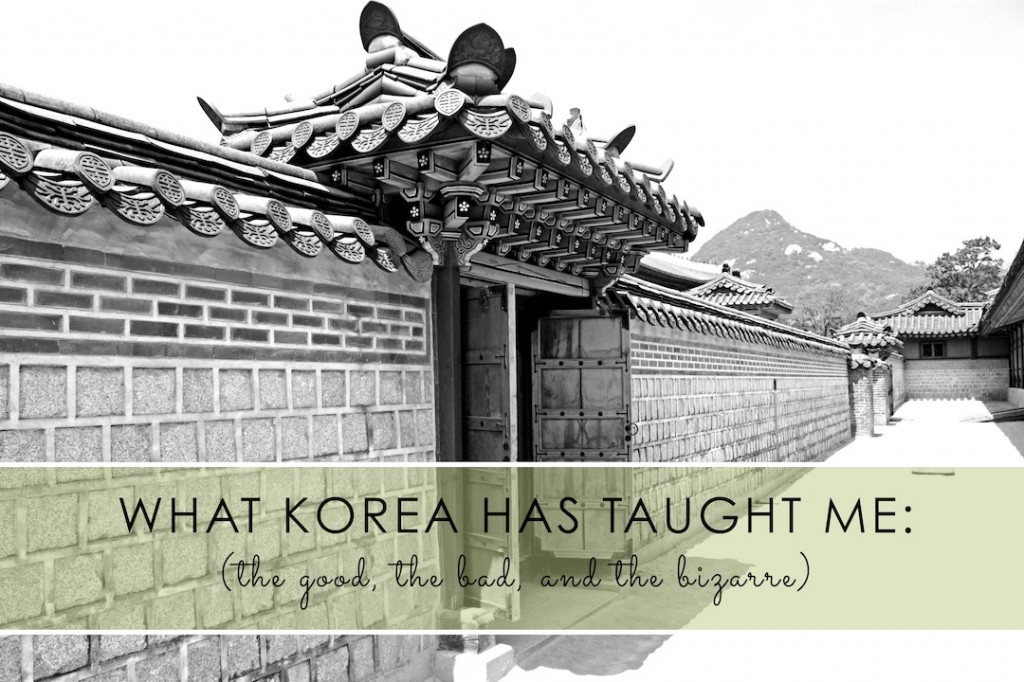 1. Never to get mad at that Indian customer service representative again. This one is something I’ve learned while living with the crazy language barrier. Living back in the US I took speaking English for granted. People around me (as well as myself) would often complain about how they can hardly understand the customer service reps when they called about their phones or credit cards. All I have to say to that (now…looking back on it) is, well at least they speak English, and really attempt to understand! I feel bad that I complained about them in the past. Now, in Korea, living in a language foreign to me, I go through each day with more silence than I ever thought possible. I live in a ‘bubble’ and people are chattering around me, but since I don’t know enough of the language, I easily tune it out.

I appreciate speaking English. I had a little girl from Texas randomly in one of my Kindergarden classes just for two classes, but I couldn’t believe how much I missed talking to native English speaking 4 year olds. Would it be pathetic if I said I didn’t want to leave her?

2. Eat to live, don’t live to eat. If you’ve ever spent even a week outside the United States, you’ll realize just how dependent the USA is on food. Hey, it’s freaking yummy I get that! We to often get caught up in  the splendor of eating that we forget life doesn’t revolve around meals. It’s hard to break the concept. Think about it: You wake up and eat BREAKFAST, go to work and get your first break at LUNCH, then come home for DINNER. That basically sums up your day.

In Korea, the locals eat pretty much the same thing for all three meals. Asians typically have a super fast metabolism, so they eat more than three times a day. The staple of their diet consists mostly of: rice, kimchi, seaweed soup. No joke. Now that’s breakfast, lunch and dinner. If they want a snack? They go to the local 7-11 and grab some ramen noodles to go. It doesn’t seem like a meal itself is that exciting to Koreans. Getting together with their family and friends for a meal is what excites them. 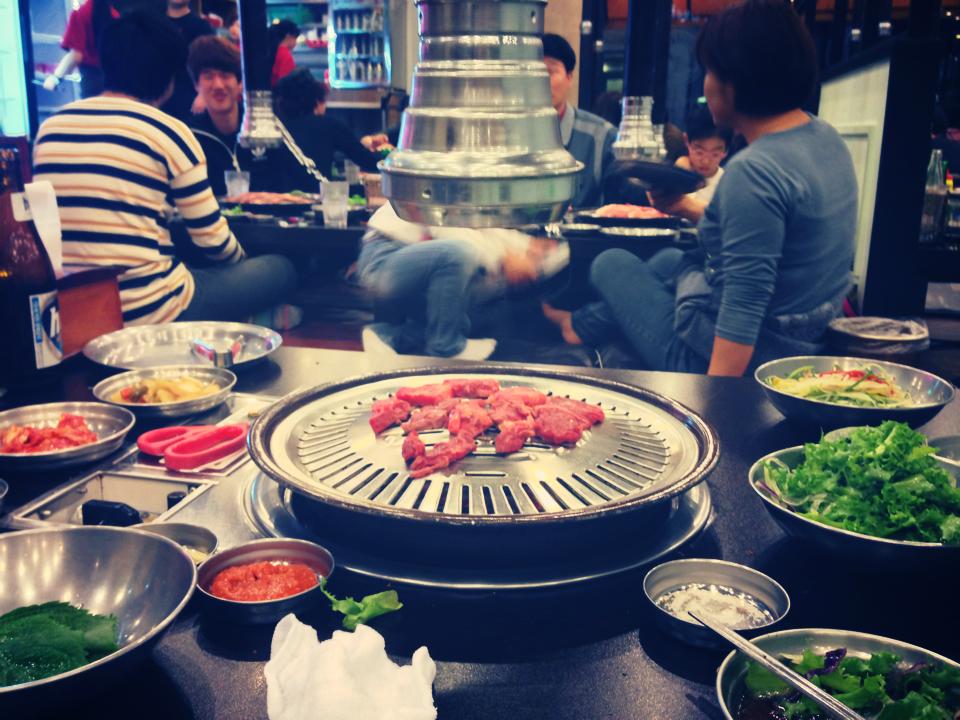 I think a lot is to be said over the general health of the Korean population. I know obesity is on the rise, but in the overall scheme of things, they’re way behind America when it comes to over indulgence problems (let’s not get into their alcohol consumption though, that may yield a quite different result).

3. Plain water is gross. This is so weird to me. Water is served in restaurants in the tiniest of glasses, I’d say it equates to less than 1/2 a cup of water. I can suck it down in one big gulp, and then I’m left getting up a million times for more (yep self-service on the water).  What boggles my mind is that I’ll look over at other tables and they’ve barely touched their waters. I honestly have no idea how they don’t have more cases of dehydration. The only liquids I ever see people throwing down the hatch in public seem to be coffee, tea, soda, and alcohol.

Even my 6 year old students don’t like plain water. The Korean teachers will boil water with rice or sometimes add a little bit of green tea to change the taste. When I asked them why they like the ‘flavored’ water better, they just said plain water tastes gross.

4. The bigger the smart phone, the better. The smart phones in Korea are out of control. Seriously. I used to make fun of tablets and how I was certain one day people would be using their tablets as phones. Looks like I wasn’t too far off. The screens on these smartphones are so big that they can’t even the darn phone in their pockets. I’m not sure why they think that ginormous phones are awesome (wait, wasn’t it not too long ago we were trying to make phones super small?), but the size of the screen definitely needs to stop growing.

5.  The smaller the dog, the better. One thing that does need to start growing would be the dogs here in Asia. One of my friend’s little boys just got a dog for Christmas. It’s a tiny little fuzzy white thing, just as cute as can be, but not even the size of my foot. My foot is 9″ long, and this puppy wasn’t even 7″. Blows my mind.

They breed their dogs here to be super, super small, because the ‘latest rage’ is sticking your puppy in your coat pockets or purse. I think its cruel to be breeding these animals so small, and there are lots of health problems that arise because of it…  but we’ll leave that for another day.

I’m a big dog lover all the way (like great dane big), so sometimes these miniature dogs make no sense to me.

6. If it’s broken, buy a new one; don’t worry about fixing the old. I don’t know if it’s due to their not-so-secret economic boom, but everyone seems to have money to spend. Or at least limitless credit cards to put all their purchases on. Your computer isn’t working right? Buy a new one. Your couch is getting more than 4 years old? Buy a new one. Don’t have an outfit to match your significant other’s perfectly? Buy one. Your car breaks down? Buy a new one.Weirdest mentality ever…especially coming from a culture that has no problem fixing everything and then using it until it is either a) a million years old and is illegal to use anymore, or b) has literally completely fallen apart.

But hey-this whole ‘broken/old buy a new one’ thing works great for us foreigners (seriously, don’t mind us over here digging through your trash). Not only do we have two cars 10-15 years younger than me that collectively cost us less than my digital camera,  we have quite the stash of household furniture carefully placed about the house that cannot be more than 5-7 years old. THANK YOU Korea.

7. I’m comfortable with where I am, so why do anything ‘out of the ordinary’?  Although I’m judging this based mostly off of children, it’s really strange to me that so many people don’t want to even try life outside their comfort zone. When asking my students where they want to go on vacation, or where they want to live if they could live anywhere in the world, 95% of them will say: “Korea,” “Seoul,” “Busan.” When asked again why they don’t want to travel outside Korea, they shrug their shoulders and say, “Because I don’t want to.”

I’ve noticed the same thing when it comes to food. One of the most hilarious things I’ve ever done in my teaching career was make peanut butter and jelly sandwiches with my students. Yeah, not something I’d consider ‘weird’ or ‘strange,’ but according to my students I might as well have asked them to eat a chocolate/tomato sandwich. Would you believe in a class of 14 pre-teens, only one boy decided to give it a try? One.

There was another time I brought in salt water taffy, and it took the entire 40 minute class for my students (after smelling it and pulling it apart with their fingers) to even try a tiny corner of the piece I gave them. Why? Because it’s unfamiliar. I think coming from a country that is such a melting pot of so many different places, trying new things is somewhat second nature. I totally understand having reservations, and if you ever tried to get me to eat grilled monkey brains, it’s not going to happen.

8.  Why not document every important thing you did during the day with a ‘selfie?’ This one makes me smile. I’m petrified that Iwhen I go back to the States I will have (unknowingly) picked up this Asian trend. You’re eating lunch at Mcdonalds? Take a selfie. You’re looking at clothes in a store? Take a selfie. You’re waiting in line for a movie? Best time to take a selfie. I guarantee if you scan a crowd in Asia, you’ll be able to find at least 5-10 people in one setting taking a picture of themselves. 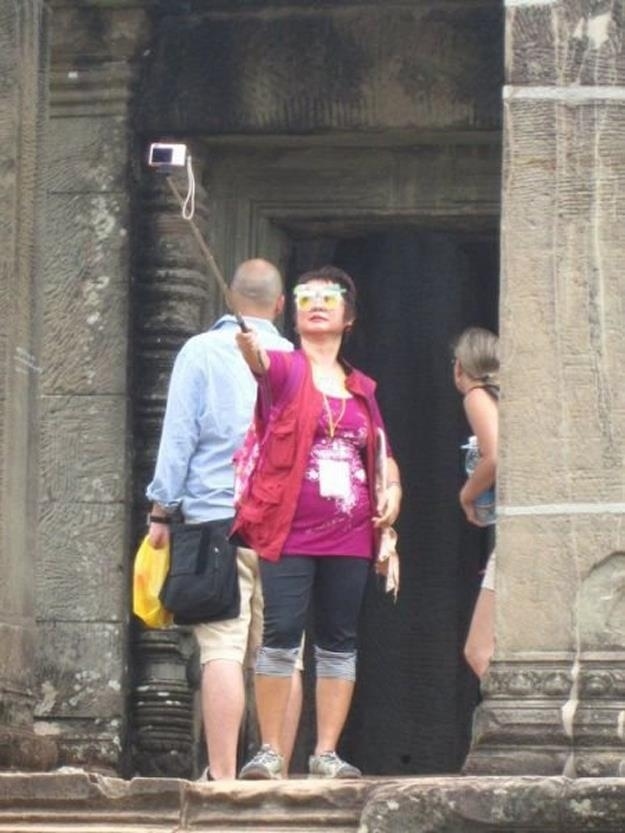 Hey, it’s good to document everything with pictures, why not document yourself doing those things? eh?

9.  If all your friends are doing something you better climb on board too. I don’t get this. It’s not uncommon to lose a student at academy (due to a new English academy opening up or some other reason), then a few days later lose two or three more because they were wanting to go to the same academy that their friend now goes to.

Or what about this one? Three of my friends just upgraded to the new Samsung Galaxy 4, so sure as heck I’m going to buy myself one too! This seriously happened a few months ago, involving 4 co-teachers. They all had various phone types, but then when one girl got the new phone, the rest of the co-teachers went together to get the same phone, and matching cases. Twinkies much?

10.  Family is the most important. I love this about Korea. Sure there are flaws in the system, but Korea is very traditional when it comes to family. They almost always spend time doing family things on the weekends, eat family dinners, and stay connected (my students get phone calls from their moms all the time in the middle of class). The grandparents are particularly involved with the grandchildren, taking them out to play in parks, watching movies, and going shopping. Once the grandparents get to a certain age, they actually move into their children’s homes to be taken care of and to be an extra help for the grandchildren. How about that?

There is a huge respect for elders in Asia. Students respect both their parents and grandparents, and genuinely care for their wellbeing. It’s a wonderful thing to see and witness, especially with how terrible the younger generation in the US is at this.

Although Korea has tried to rub off a few strange ideas on me, I have discovered that there are certain things Korea does that is actually something I should pay attention to/learn from.

The best thing about living overseas is that you get to experience life a whole different way then what you are used to, or even capable of understanding. I am so grateful for the opportunities to learn (and have a good laugh or two).