A few weeks ago I posted about the gigantic International Fireworks Festival in Busan, and had a lot of interest in a tutorial about how to shoot fireworks. So here I am today, delivering on promised goods! We’re going to have a short and sweet lesson on how to get the most out of your firework pictures.

Let’s face it. We’ve all been to that amazing fireworks show, just to come home, take a look at our camera roll, and realize we shot jack squat for pictures.  Well I’m here today to teach you how to capture those fireworks in a way that makes them look just as amazing (or better) than they did at the show!

-A camera that has a manual mode (fully adjustable aperture,  iso, and shutter speed) If you have no idea what I’m talking about, go read Rachel’s post about understanding these three things here.
-Camera tripod
-Remote (preferably a wired remote, not wireless)

Believe it or not, taking firework pictures is actually pretty easy, but does involve some creativity.

Go to your optimal viewing spot a little bit ahead of time (I went 8 hours before the show in Busan, but there were  literally a million spectators all fighting for a spot) to set up your tripod and make sure everything looks great through your viewfinder. This is where you’re going to pick an ‘infinite’ focal point. You’ll be placing your focus on manual, because if you don’t half the night you’ll be fighting your camera as it tries to focus on moving light…and miss half the show. Focus on something far away, and basically max out your focal length. My focal point for this fireworks show was the bridge. 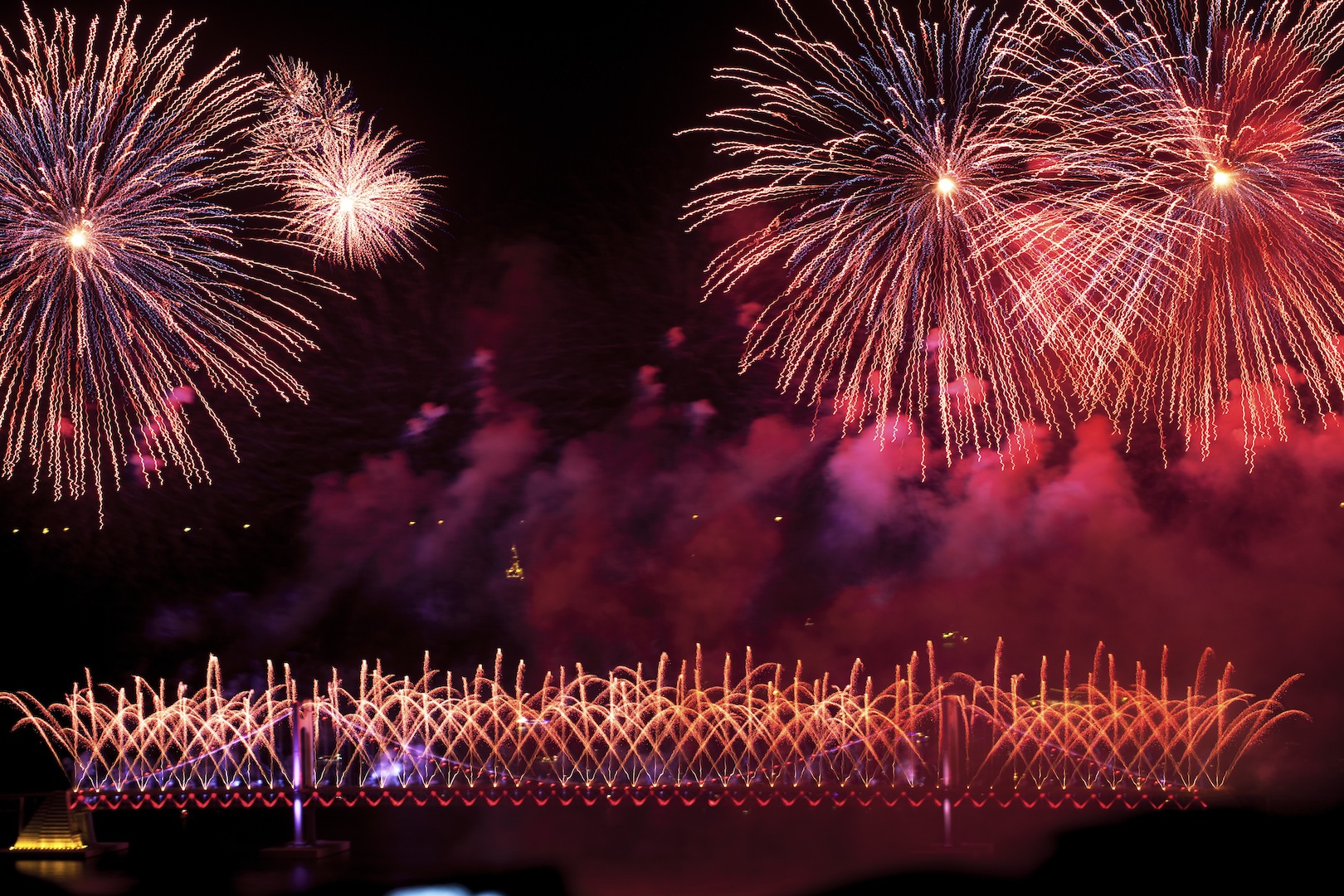 Bring your aperture (f-stop) to a high number(would you believe this is also called a small aperture? Yeah, makes no sense). Yet again, if you’re unsure of what this is, go check out Rachel’s Tutorial. You’re wanting to bring your aperture to an f.6-13. I spent part of the show playing around with this, and you’ll notice that different settings will give you different results.

Use ‘BULB’ mode. 90% of people won’t even know what the heck this is on their camera. It’s a setting to use in low lighting to help capture light. The cool thing about BULB mode is that it won’t stop ‘recording’ a picture until you release the shutter button. So hold it down for however long you’d like!. If you have a remote? Even better.

I started taking pictures of this fireworks festival with a shutter speed of 3.2 seconds, the setting on manual, and with a two second self timer (remember, I forgot my remote). It worked ok, it was just really hard to time the firework explosions just right. The goal is to press the shudder button after you hear that first ‘pop’ so you can get the explosion. 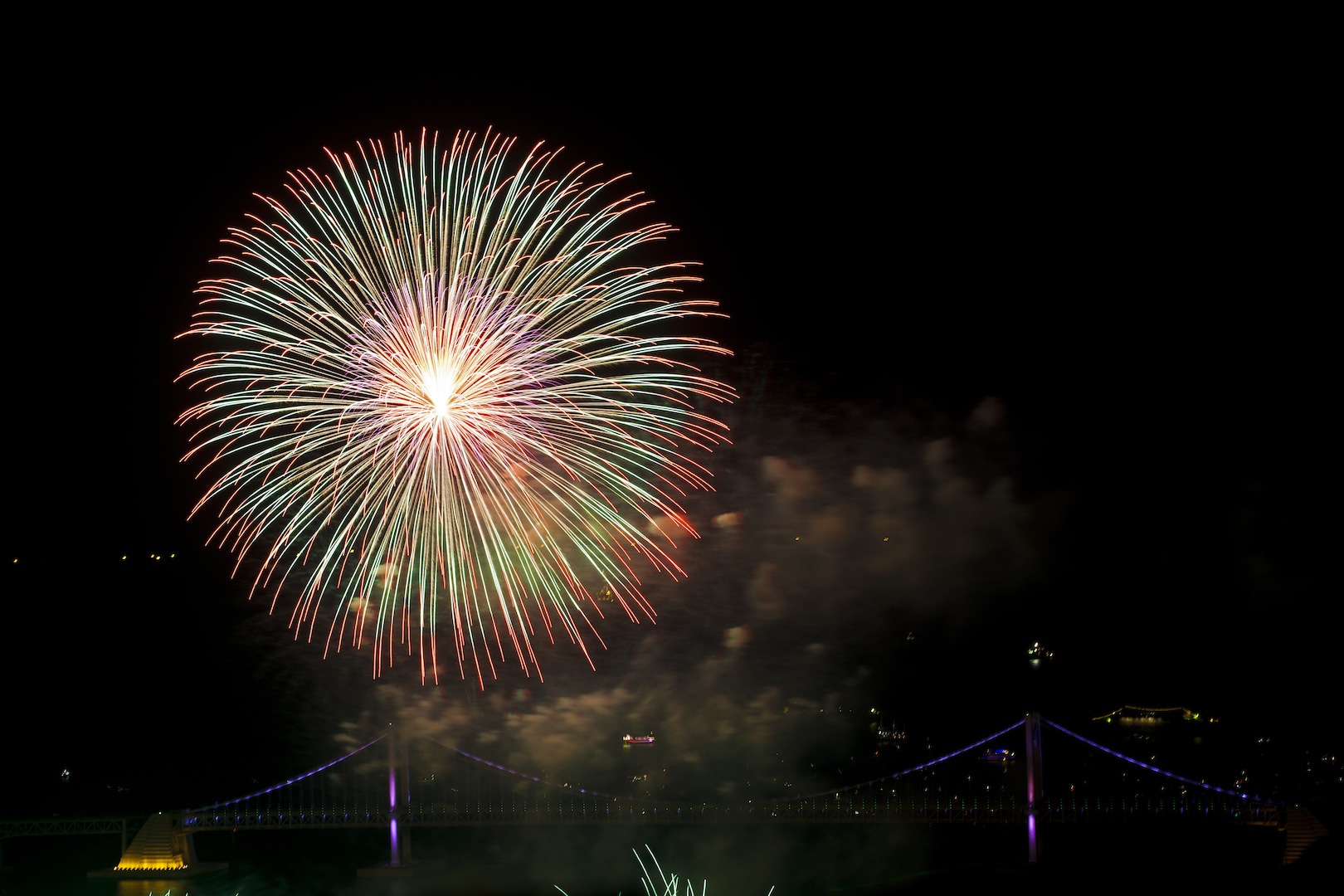 The only thing I hated about using the self timer was that I wasn’t able to control exactly what was being taken in the picture. I decided to switch to BULB mode and was able to control my photos a little more. I would hold the trigger down for 3-6 seconds, depending on the brightness of the firework. You’ll be tempted to hold that button down longer, but trust me, you don’t want to do that. You’ll end up with a ton of over-exposed photos.

One thing I should mention about my BULB mode photos. I did not have a remote (I was an idiot and left it at home). I had to constantly wrestle with the crowds behind me to keep them from knocking me and my tripod over, and unfortunately, the one of the key thing about bulb mode is that you have to be perfectly still. I wasn’t, and you can see the difference between the two pictures I posted above. The light trails of the first one are shaky and unstable. The second (When my hand was completely off the trigger and the camera was doing it’s own thing on self-timer)? The light trails are crisp and sharp.

Now, don’t let that scare you from bulb mode!  Just make sure you stay still and have a remote and you can get the same effect as you would using a timer.

Be sure to turn your ISO down. Basically, in a nutshell, the ISO measures your camera’s sensitivity to light. Did you know that fireworks are super bright? I set my ISO to the lowest setting possible (ISO 100) and called it good. I promise you it’ll be enough for you.

Turn off your flash. Nothing strikes my photographer’s angry nerve than someone who uses a flash. Seriously, it’s like fighting light with light. Your flash will just dull the effect of the firework. You’ll get nowhere  with it. Besides, do you think your flash can really reach that far? Just because it’s dark doesn’t mean you need to use it.

Last but not least? Have fun and get creative. Here’s the deal. You’re at a fireworks show! Enjoy it! If one picture doesn’t work out, change your settings slightly and try again! Try holding your shutter button down on BULB mode for various lengths of time, try changing your aperture, try using self timer. :) Although this is a guide to get you great results, there is no exact cookie cutter equation.

Don’t forget to take a few moments and enjoy the show away from that viewfinder. You’ll be happy you did. 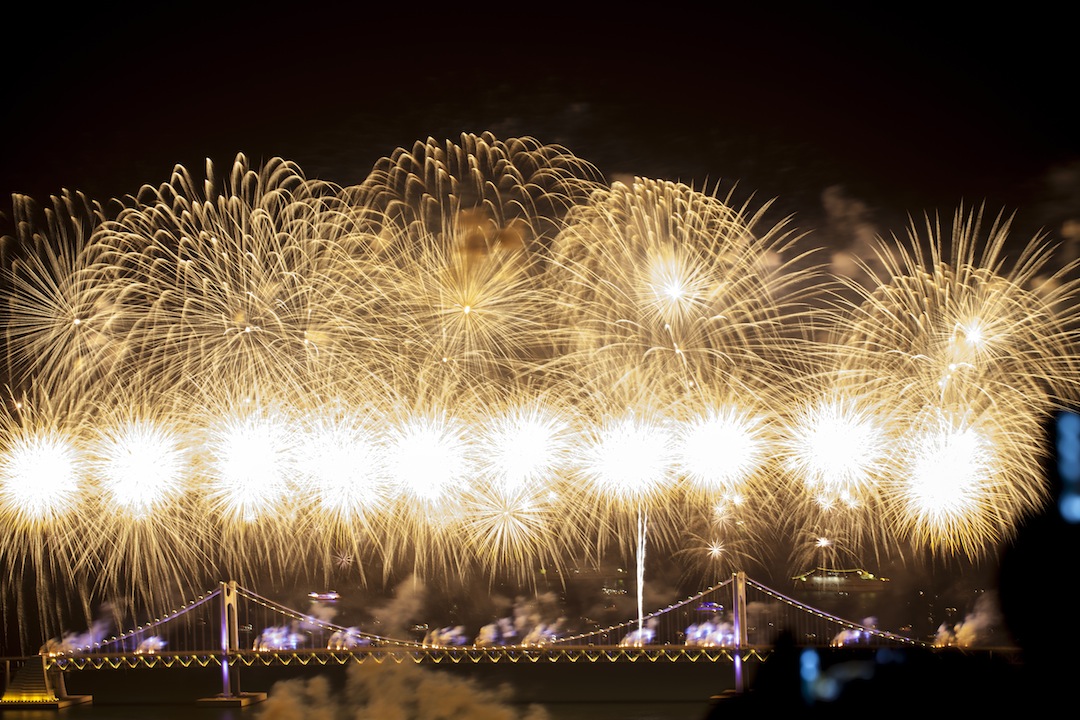