I knew it was just going to be a matter of time before a strange item would be sighted in a bathroom stall. Public bathrooms are just strange here. Not only do they make miniature toilets for the little ones, but they give you moist towelettes to wipe down the seat before you go.

If you need to use the restroom in a more ‘lavish’ area, many times they have bidets instead of normal toilets.  If you’re not sure what a bidet is, it’s basically a toilet that ‘cleans’ you, instead of you using toilet paper. Some of them even have heated seats.  I don’t even know how many awkward situations I’ve been in…looking at all the buttons (in Korean btw), and trying to figure out how to flush the stupid toilet!

I’m actually not writing today to talk about bidets, but an entirely different electronic mechanism used in many Korean bathrooms today. Check this out.

As you can guess, the first time I saw this, I was quite curious. Something called an ‘Etiquette Bell’ with the words push labeled on the button…I couldn’t help my child-like hands. I figured since the writing wasn’t in red, and I wasn’t in a hospital, it wouldn’t be just used in emergency situations.

I admit I was a little scared that the lights would start flashing, and my door would burst open to the sight of 5 or 6 janitors staring at me with mops and plungers. “Oh well,” I thought, “What the heck. I’m an American and I can just say I didn’t know.”

As soon as I pressed the button, soothing sounds of multiple toilets flushing, rain pouring, and oceans crashing filled my ears.

There may be multitudes of people that suffer from shy bladders or other such conditions. I suppose this invention would benefit them to the extreme. For me? It was a genuine source of entertainment, even though it only lasted 30 seconds.

Want to check out other Weird Wednesday posts? Click here. 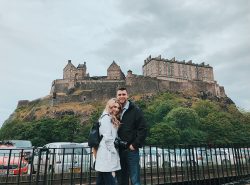